My oh my, absolutely perfect day for an excursion and while I wasn’t able to take part in the entire MaiFest run to Hermann (thanks for setting it up, President Lowe!), YFE had fun getting photos and some commentary at the start point out in Wildwood.

For the record,12 cars, the majority Triumphs but the owners of the following also joined in: a Jaguar XJ6, SLTOA members Mike and Sonja Poropat in their ’68 Morgan +4 and a couple from Scott AFB in their continuation Porsche RS550 which was immaculate (if rather stark). Not sure how the Porsche owners found out about the drive but hey, the more the merrier and their car sure looked good amongst the LBCs. 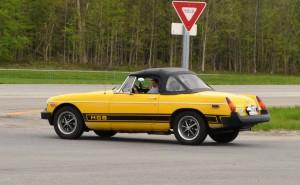 For the return trip, I drove fromÂ Bowie, MD to Logansport, IN (via western Maryland, far northeastern Ohio and then down through Lima to Terre Haute, IN) with a fair amount of interstate travel, interspersed with extended stretches of two-lane US highways including the Lincoln Highway.Â  During the course of the two-day run, saw a number of really interesting cars, all in outstanding shape: a 1966 Chevy Impala convertible;Â  two ’68 Plymouth Road Runners; ’68 Chevy Camaro; 1980 Oldsmobile Toronado (complete with Ohio historic vehicle plates); plus serious off-road/neighborhood superiority vehicles, including an M4 Sherman, M5 Stuart and M42 Duster.

FINALLY, near Logansport, IN, saw an LBC: the late-model, crash bumper MGB seen above.Â  Almost stopped the truck to do a victory dance but instead I concentrated on getting some photos as quickly as possible.

Pretty cool, glad to see at least one Brit sports car out and about during the eight-day patrol.Â  However, for the official neatest car of the excursion, see below. 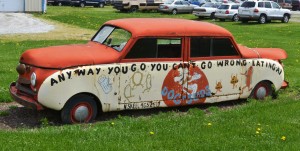 As mentioned above, YFE saw several interesting cars and one LBC on the return drive from Bowie, MD, over 8-9 May. However, this one took the prize as THE Most Entertaining Vehicle of the eight-day patrol back east: a dual-ended 1948 Crosley, parked out back of the Dog ‘n Suds in Lafayette, IN.

You know, if I knew anything about Crosleys I’d look into acquiring this, er, classic (hulk?) and see about getting it road-worthy again. Shoot, I’d even consider getting the MG Doc to stuff a 1275cc in it, replacing the Crosley’s original 724cc SOHC COBRA engine.

Oh, and Dog ‘n Suds? Great burger and root beer, as always. If anyone’s interested, the nearest survivor of this once wide-spread chain is in Cherokee Pass, south of Fredericktown on US 67 at Cherokee Pass. The food is doggone good (hey, that’s what the t-shirts say!).

Yeah, I admit, this obviously isn’t an LBC but, seeing as the duty SLTOA Marine has a Corvette, I thought I’d throw this out there. One YFE’s oldest Naval Aviation buds also recently acquired his dream ‘Vette, followed by the requisite pilgrimage to Bowling Green, KY. While there, he was able to participate in some sort of “Offensive Driving” course; the photo depicts the result. You have to admit, he looks like he’s ready for anything (and yes, that’s F-111F “Aardvark” 74-0178, 48th Tac Fighter Wing in the background; this particular aircraft left a calling card on the Al Azziziyah Barracks back in April 1986).

More details in the June 2014 edition of “Exhaust Notes.” In the meantime, two final notables concerning driving in Annapolis, MD (in and around a continuing lack of LBCs):

1) There’s something unique about seeing an adult male walking down the street wearing a “Teenage Mutant Ninja Turtles” backpack…the one that is shaped like a spiked turtle shell. And,

Back on the road tomorrow, heading westbound.

Still in Maryland, but with a break in the action yesterday I managed a lap of greater Philadelphia, pretty much an all-day event in and around dodging rain showers. The intended targets included a former air defense missile site east of Philadelphia (operative phrase for that part of the trip: “New Jersey…AND, safely home again”), a couple of Naval Aviation sites plus some family history locales including the oldest, still-standing house built by the first of my ancestors to come over from Wales, dating to about 1704.

And, as always, the patrol for LBCs continue…and, sad to say, despite something like eight hours on the road and nearly 400 miles, I didn’t see a single Brit sports car. I DID see yet another one of those ubiquitous red-orange Fiat 124 Spiders. Guess I owe myself the award of a six-pack of Natty Bo (and for those who don’t recognize the term “Natty Bo,” feel free to contact me via the SLTOA web page for an explanation…or, find someone in SLTOA who’s lived in the vicinity of Philly/southern New Jersey).

Finally, the Cheesesteak Capital VTR chapter is the Delaware Valley Triumphs (www.dvtr.org/home.htm). Again, looks like a big, busy group which has a lot of fun. Interestingly enough, noted automotive journalist Dick Langworth played a major role in organizing the club back in 1976.

Anyway, turns out on 31 May DVT will hold its annual Cars & Motorcycles of England show at Oakbourne Mansion in Westtown, PA (west of Philadelphia off US 202). The event’s apparently concurrent with the Delaware Valley Jaguar Club’s JCNA Concours d’Elegance.

Hmmm…considering what I’m involved with right now back east, if I’m once again in Bowie, MD, come the end of the month, it might be worth the drive north to Westtown with camera and note pad.

As per usual, I’m keeping an eye out for LBCs and other exotics while out roaming about. Sad to say, as of yet I haven’t seen anything above and beyond the usual contemporary Jaguar and Land Rover products, although a really nice Aston Martin blew past me earlier this AM. However, as I’m probably going to be here in close proximity to the Chesapeake through the coming week, I’ll keep an eye out for Brit vehicles.

BTW, there are two major Triumph clubs hereabouts, both chapters of VTR: the Maryland club, Triumphs Around the Chesapeake (TRAC), and the Capital Triumph Register. From looking at their web pages, they both look like strong, active organizations…and, truth be known, up until last Monday (28 April), I was already looking at both clubs with an eye towards affiliation.

Ah, but Monday AM at work, I found out I wasn’t getting the promotion I’d applied for, a promotion which would’ve required leaving St Louis for the five-sided wind tunnel on the Potomac.

Sooo, looks like y’all are stuck with YFE for a while! More field reports later this week…