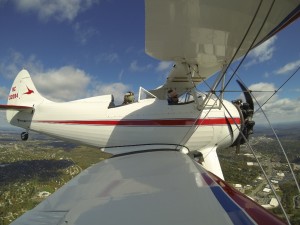 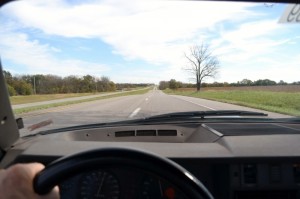 Helluva good weekend, to use technical terms. Yesterday YFE managed to get up in a biplane for the first time, a birthday present from Bride of Morganstein; had an absolute ball, particularly the aerobatics. First time I’ve done them since, oh, an 1V1 ACM hop over Mobile Bay in a TA-4J back in late 1977. I do believe I need to get my private pilot’s license. Following the flight, the bride and I journeyed to Kansas City, business trip for her but also an opportunity to spend some time with the daughter and son-in-law of Morganstein.

The solo drive today featured absolutely perfect weather and fair amount of interesting cars on the road, including an immaculate 38-39 Graham Model 97 “Sharknose” rod. First time I’d ever seen one of those. Also, as I stayed off I-70 for the entire run back from KCMO, I managed to work in lunch in Jefferson City with members of Gateway VCOA and their Kansas City counterparts AND ran MO 94, from Jeff City all the way to I-64, great time and a truly great bunch of people.

My conveyance? Let’s just say it’s lumpy, bumpy and downright garish, but I will make this point: I now have a place to play all those cassettes I’ve been storing the past few years. 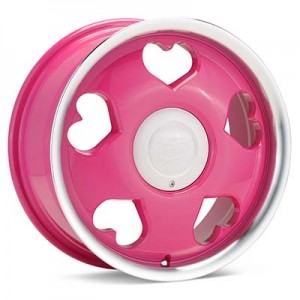 Another entry in the “If you show up with these on your car, you’ll lose your Triumph card” category (and if you must, www.tansywheels.com).

Just got back from an 11-hour, out-and-back to Kansas City to check out a TR8…and as anyone in the Midwest knows, the rain has now continued for three days, with major thunderstorms and downpours particularly evident today. Which resulted in one of those meaning of life moments…

Outside of Columbia, MO, this morning, westbound, visibility at times fell to 1/8 mile OR LESS in pounding rain, mist and the requisite bow-waves generated by passing semis; ceiling obscured, generally WOXOF all over the place. On the plus side, I’d say 99% of my fellow drivers did have their lights on and dropped their speeds from the 70 mph limit to something more reasonable and safe. Which, of course, left the 1% who a) still attempted to do 70; b) with their lights off (“Hey, I can see just fine!”); and c) probably were on their cell phones. Amazingly enough, I only saw two serious accidents between StL and KCI.

Oh, the TR8s? Some in SLTOA may have heard I was considering two 8s which recently came up for sale. Regret to say negotiations for the ’81 w/fuel injection down in DFW collapsed earlier this week; there’s a story involved, will be glad to pass it on to anyone who wants to hear it. The KC TR8? Stay tuned…

Temperatures plummeting, leaves turning (and, if my front yard is any indication, also plummeting), like I said, hope every TR owner’s heater works!Â  Out on patrol briefly today, the one standout was a Ford Mustang Boss 302 in proper Schoolbus Yellow, the same color used by the Bud Moore team in the ’70 TransAm series.Â  Didn’t see any LBCs today but I DID see Jim Dooley out tooling around in his Spitfire a few days ago.

And, in a few hours, hopefully we’ll see a good turnout at the commuter lot on I-64 and MO 94, fired up and ready for a fun day down to New Haven, Washington and back.Â  Full details w/ photos in the next “Exhaust Notes.”