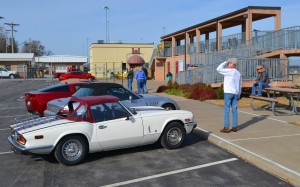 Three years ago SLTOA member Joe G. called out the faithful for a drive the Saturday following Thanksgiving (or was it Sunday?), across the river to a great German restaurant near Waterloo, named (for whatever reason) Dreamland Palace. Had great weather, good temps (well, at least until the sun went down) and about five cars/seven members made the run.

This year, with Saturday’s temperature expected to exceed 60 degrees, we tried it again. Almost completely different cast from the first Post-Turkey Day Drive, but once again, we turned out five cars, albeit hauling nine members. Had a great time: up MO 79 to Louisiana with a stop in Clarksville to take in Lock & Dam No. 24 (as well as a rather loud domestic disturbance at the apartments directly across the street…ah, that holiday cheer, it’s definitely spreading), then back via Bowling Green and Troy.

Finding a meal in Louisiana proved daunting: turned our our planned stop shut down its “bistro” some time ago…the secondary option didn’t look too appealing, so we went charging across the river on the US 54 bridge…to find the tertiary option was also closed down. Sheesh…We ended up going on to Bowling Green where, on Business US 54, found a great ma and pa place named “Crystal’s” (the broiled chicken is the local favorite).

Afterwards, a couple of our merry band returned to greater StL via US 61 through Wentzville, while the TR8 and Z3 did the back roads/high speed/great fun thing to Troy, followed by more winding back roads into the north side of O’Fallon. All in all, a great day and quite probably the last club driving excursion this year.

Two observations: After doing 212 miles in the TR8, climbing into my daily driver – the ’14 Kia Forte5 – was like stepping up into a ’68 Impala…felt like I was sitting WAY UP in the air, surrounded by extensive sheet metal and glass.

Observation No 2: Candidates for the annual Darwin Award are always around us. When YFE stopped at a Phillips 66 station on Manchester to top off the tank, prior to putting the HSD back in the garage, a woman in a Chrysler mini-van two pumps over merrily sat in the driver’s seat and dangled her lit cigarette out the window…while her husband pumped the gas, some 10 ft aft.

Fortunately, YFE was able to gas the TR8 and depart the scene prior to any major detonations…Uniform Fox Bravo. 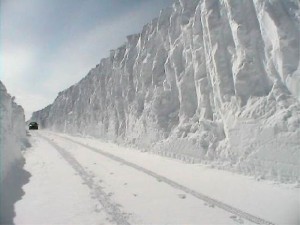 The drive home from Scott AFB earlier this evening proved particularly sporting: just enough snow and low temperature to make things a tad slickery. Passed one big wreck on IL 15 heading west towards I-255 (both large SUVs, apparently they played bumper car) plus three pretty good-sized accidents on I-55 north of I-270, which of course resulted in a substantial traffic jam.

Entertaining aspects of driving in St Louis when the snows start: a) the number of SUV/AWD vehicle drivers who drive 65 mph in snow and ice because the the speed limit sign says 65 (This comment is by someone who drove 4WD trucks/SUVs pretty much exclusively from 1986 to 2014; as I tell people, particularly my daughters when I was giving them driving lessons a few years back, four-wheel-drive means all four of your wheels will still have power when you go spinning off the road); b) the number of drivers – both sides of the river – who continue to barrel down the freeway in all conditions with cell phone firmly welded to their right ear; and c) with visiblity at 1/4 mile, maybe 1/2 mile in snow and fog, the incredible number of drivers – invariably in light-colored cars – who fail to turn on their lights. ARRRGHHH…

But, home safely, looking forward to a little extra sleep tonight and a fine Thanksgiving holiday with family tomorrow. I’m also looking forward to getting out for a 2-3 hour drive Saturday; so far four other owners/cars have signed up, maybe we’ll turn up a few more (and if you’re reading this and would like to come along, contact the Exhaust Notes editor via the SLTOA web page).

In the meantime, to all who periodically read this blog from the Triumphs of St Louis, wherever you are, may you and yours have a very Happy Thanksgiving.

Belay my last, just checked the weather forecast for the coming 10 days and it looks like we’ll get a few more opportunities to actually engage in no-kidding-top-down-motoring:

Realize that we’re into Thanksgiving week (already!?) and from here through the end of the year, the family and special event schedules are pretty packed (for example: YFE is a member of a multi-church choir that’s presenting Handel’s “The Messiah” in a couple of weeks in the west side of StL, hence, plenty of weekend rehearsals). Still, it would be nice to get out for a multi-hour patrol, say this coming Saturday mid-day. In fact, I think I’ll do just that…

You know, when the temperature towards the end of November hits 60 or slightly over, you darn near HAVE to get the LBC out for a run. However, one look at the overcast Sat AM and I made the decision to leave the top up; that turned out to be a darn good thing, as halfway through today’s patrol the rain really started coming down.

I don’t know if the High-Speed Doorstop is a good all-weather vehicle, but it handled the rain just fine and holy cow, even the window defog worked! Minimal leaks inside (yes, I do keep the duty Triumph Towel on the rear deck, thank you), standing starts were without drama but shifts to second – particularly when going around corners – were on the edge of dramatic, but I managed to correct without winding up in someone’s front yard. Good clean fun…what was particularly hilarious, though, was the sight of YFE attempting to get in and out of the TR8 with the top up. It’d probably be easier if I were a tad younger and didn’t have arthritis…

Very glad I went out, suspect with the non-stop pounding rain predicted for tomorrow, this was the last patrol until 8 February and the annual Polar Bear Run. Oh, and I saw one other sports car: a late-model Toyota MR2 (aka “Mr Deuce”)…and yes, we waved at each other.

Two weeks until the Christmas party, get those reservations in!Â Â  Oh, and if you just happen to be in greater Buffalo-Niagara Falls and are reading this, our collective sympathy over the 10 inches of snow y’all just received.Â Â  I have no doubt our turn is coming down here in the great Midwest.

Doggone, another nice one a couple of days back and as the temperature rose to the vicinity of 40 degrees, I came THIS CLOSE to getting the HSD (my ’80 TR8) out of the garage and out for a romp. Back when I had the WFRRPC, the lower temp limit for excursions was about 45, but then again the World Famous Red Rolling Parts Car didn’t have a functioning heater, where the High-Speed Doorstop most definitely has a good heater.

Ahhhh, but I got wrapped up in local errands and the never-ending battle of trying to organize the basement and then the snow started falling. The idea of driving a front-engine V8 with no weight over the back end in freezing precip sounded a tad too exciting (yeah, I know, John Buffum used to do it all the time) soooo, the TR8 remained in the garage.

BUT, according to the weather forecast, the highs this weekend should be in the mid-50s, so there might be hope. Conversely, the forecast is for periods of rain both days. Okay, the top stays up, should still be able to get out for a while before I put the TR8 back in winter storage. The local Corvair club’s planning a drive Sunday afternoon, that might be worth a run over to IL 3 for some photos, although for all I know showing up in a Wedge may prove as popular as tossing a skunkÂ into a bridal shower, but we’ll see.

SLTOA meeting night and fried pickles tonight at O’Leary’s on the east side of Lindbergh, south of I-44 and Watson. If you’re reading this and don’t have other plans for the evening, why not join us? The Triumph owners are the buccaneers of the local LBC scene (although the M.A.D.M.E.N. give us a run for our money), always highly entertaining gatherings…

Originally the plan involved one (probable) final drive of the TR8 for the season today, Veterans Day. BUT, last evening, still warm, clear skies and sunset beckoning, I went ahead and took The Doorstop out. Enjoyed a delightful 40-or-so-minute local patrol and knocked off a couple of errands to boot.

In retrospect, good thing I went out last night…admittedly at the moment it’s “only” 37 degrees out there, but with overcast skies and the wind blowing, I do believe I won’t be taking the Triumph out again any time soon. I disconnected the battery, put the top up (learned the “don’t leave the top folded during winter” lesson the hard way last year) and most likely all drives for the next several months will involve either the Bride of Morganstein’s SUV or my small FWD sport sedan. All well and good.

To all who may have ventured out one last time last evening, hope y’all had fun.Â  It was definitely a great evening for a drive.

Finally, to all those who have served in the US military, a hearty salute on this Veterans Day.

SLTOA did something of a split-squad thing today, with several members running in the last Boeing Sports Car Club autocross of the season and the others heading out on the 2nd Annual Veteran’s Day Drive. We’ll have to wait a few days to get the results from the autocross, which’ll determine this season’s “champion” of the club’s Slow Roller Racing Team.

As for the run south to Chester and Perryville, the day may have started a tad chilly but by Prairie du Rocher it was warm enough to put tops down…at least, on those cars which had convertible tops. Full details in the December issue of “Exhaust Notes” but in the meantime, another donation to the Fisher House Foundation will be on the way within a few days. Our thanks to all who participated and contributed.

Great fun, great day, great group and several of the SLTOA faithful are already thinking up ideas for next year, including adding a couple of stops to the 2015 Vet’s Run. A couple of members discussed the idea of adding a drive or two on the Illinois side of the river (YES!) and another member said something about setting up a mid-state meet at some point next year, with an invitation to other clubs.

BUT, in the meantime, SLTOA Christmas Party on 5 December and only three months until Polar Bear. According to the weather guessers, we’ll get a real good look at winter later this week, courtesy of our friends north of the 49th parallel.