Rats…four days straight of 50+ but the HSD is definitely hard down; time to get into the Moss catalog and order a replacement relay for the starter, hopefully that’ll get power to the starter and get me back on the road.

And, seeing as it’s SLTOA meeting night, I’ll ask my fellow Wedgeheads (as distinguished from Cheeseheads; from what I understand, they’re still going through the five stages of grief) and see what they recommend.

Just checked (Sat 17 Jan/1206L), the weather guessers are calling for a high of 60 today with severe clear. Methinks I need to check the TR8 and see if the starter relay prefers warmer weather. More to follow… 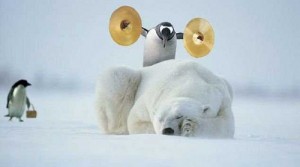 It ain’t so much the snow – which is minimal, although the eastbound transition to the Poplar Street Bridge was sporting – but today we’re looking at a lot of wind and plunging temperatures, so y’all be careful out there. Reports are the St Louis area will have a wind chill somewhere in the -10 to -20 range (which, when I lived in North Dakota, was called “springtime”) by the evening commute…and, as always, watch out for other drivers (famous last words: “But the speed limit sign indicated I could do 65!”).

Could be worse, as our friends with Minnesota Triumphs will attest: -35 wind chill currently in Minneapolis-St Paul, according to KSTP. Our amigos in the DC-Baltimore area (Capital Triumph Register and Triumphs Around the Chesapeake territory) also got hammered yesterday with plenty of snow, school delays, traffic jams, etc.

Again, what with the apparent arrival of “real winter,” y’all be careful out there.

And BTW, one month to Polar Bear 🙂

Back when I had the World Famous Rolling Red Parts Car (WFRRPC) in the garage, any time the temp got above 45 or so during the winter, I’d take the car out for a quick run…top down, no heater but hey, it was fun, you just dress appropriately, eh?

Well, today it got up into the mid-40s in light rain soooo, I decided to get the TR8 out for a romp (the HSD BTW has a fully functioning heater; good stuff, this) prior to the onset of clear skies and plummeting temperatures. However, in 20 minutes of trying, the starter only caught twice. Otherwise, nothing: no click, no sound of a starter protesting, etc, which leads me to believe the starter wasn’t receiving power.

This problem actually surfaced during the Post-Turkey drive about six weeks ago and I figured I’d eventually have to address it eventually, looks like eventually has arrived. I’ll start with an R&R of the starter solenoid and while I’m at it, check every electrical connection I can find from bow to stern. Hopefully the car will be up and running again prior to Polar Bear on 8 February. 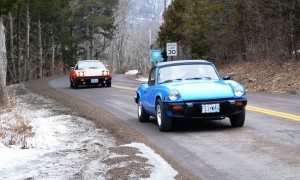 Well, 2014 expired right about 22 hours ago, but it was quite a year for SLTOA. Major events included the annual Polar Bear Run, Forest Park Easter Concours, South Central VTR, European Auto Show at Plaza Frontenac, the annual ABCCS at Creve Coeur Lake Park, the VTR national meet and, of course, the club Christmas Party (cripes, has it been a month already?).

By count, club members took part in over 20 events and activities. Some of the others included Cars & Coffee (not a month passed without at least one Triumph w/ owner making an appearance), the Boeing Sports Car Club autocross series (hail to The King, John Maneke!), MaiFest drive, the OC Joseph car show, the annual picnic, three Sunday drives, one fall drive, the Wurstmart run, Vets run and Post-Turkey II. Phew…But it didn’t stop there; once again, SLTOA members also regularly took part in the drives and events of other clubs here in the St Louis area.

Again, quite a year…and indications are we’ll have another full schedule in 2015, starting with the annual Polar Bear run in about five weeks. See y’all out there!