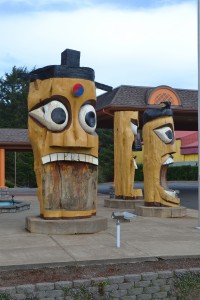 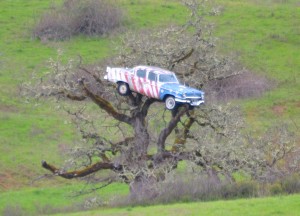 The locally famous “Car in the Tree,” a ’57 Studebaker President, on the north side of OR 18 near Willamina, OR.Â  How it got there, my daughter did not know but thanks to the head’s up she provided (“Hey dad, did you know there’s a car in a tree up ahead?”), I was able to get a photo.

Meanwhile, the search for LBCs continues… 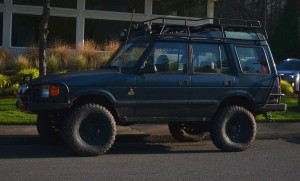 Sighted one interesting RLBC (Rather Large British Car) today, across the street from the motel in Lake Oswego, see the photo.Â  Otherwise, the usual smattering of Jags and Range Rovers, as well as an Aztek Of Many Colors…just about every body panel was a replacement and it was quite colorful, unfortunately I couldn’t get to the camera in time as we boomed down I-84.

One observation about Portland-area drivers. Obviously, in St Louis, few people use their turn signals but more often than not, at least the driver who’s coming into your lane will make sure there’s adequate room before sliding on over (yes, there are exceptions).Â  Here, they do things a little differently: I’ve seen plenty of cases of people hitting their turn signals and immediately moving over without checking their 3-6 o’clock positions. Apparently, “the signal’s on, get out of my way.”

Had one case in particular where the driver of an Acura meandered here, meandered there in front of yours truly, lined up to turn right at a major intersection and then turned left in front of YFE and a couple of other cars, lined up to go straight at the next intersection and then, without warning (save for the sudden appearance of the turn signal), decided to turn right, nearly collecting me in the process. Great fun…and yes, I immediately laid on the rental Nissan’s horn, which apparently caused the Acura driver great distress and offense to her sensibilities.

Other than that, incredibly nice day hereabouts and when I wasn’t dealing with massive traffic jams on I-5 and I-205, really good views of Mounts Hood and St Helens.Â  Gotta admit, no strong desire to move back to the Pacific Northwest but it does have its attractions… 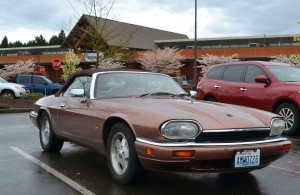 Greetings all from Lake Oswego, on the south side of Portland. Four days into this return trip to the Pacific Northwest; Seattle served as the starting point, we’ve worked our way south and later this evening will head west to the Oregon coast for major stop No. 2.

So far have seen one Jaguar XJS in the BX parking lot at McChord Field (Joint Base Lewis-McChord, adjacent to Lakewood, WA, near Tacoma) plus two original Minis in the Portland area. The region has several major LBC clubs; the Triumph-related organizations are Tyee Triumph up in Puget Sound and the Portland Triumph Owners Association. Tyee is probably one of the oldest continuously-operating TR clubs in the states, dating to the old TSOA; IIRC, they celebrated their 50th anniversary last year.

The trek continues (as does much quality time with the grandnippers), who knows what Brit sports cars will turn up in the remaining week…

Well, I swapped out the starter relay on the HSD following the arrival of a new replacement from British Parts Northwest…and the TR8 still won’t start.Â  I figured the starter wasn’t getting any electricity as it didn’t make any sound or motion when the key was turned and thereby assumed I’d start with the relay.Â  HOWEVER, according to a couple of other WedgeHeads in our club (as distinguished from Cheese Heads), it may very well be the starter’s failed, gone kaput, rang down the curtain and joined the choir invisible.

Sigh…Methinks I’d better order a replacement gear reduction starter from the Wedge Shop this week and start looking for a floor jack. The intent remains to get the car ready for April’s events, including the start of the BSCC autocross season, but the project will have to wait until I get back in town.

Would like to remind everyone that five days ago the high was in the 20s and we were looking at the prospects of more snow…funny thing about this particular winter, most of the snowfall did actually take place in March (ah, the joys of life in the Midwest!).

BUT, as we locals all know, spring decided instead to arrive over the weekend and the cars came out. SLTOA member John Lamberg called a pop-up drive for Sunday afternoon, from the photos taken by John Maneke three Triumphs and a few other cars made it. Haven’t heard the details yet but it looks like the participants all had a great time.

And there’s definitely more to come, scheduled or otherwise…