Well, another multi-hour marathon with Creig in advance of oncoming storms and once again, he applied his superior TR/tech skills while I attended (and learned). End result: the new starter is in, hooked up…and the HSD still won’t start. It would appear the old starter wasn’t the problem but, if nothing else, a new gear reduction starter is in place…and there’s one mystery wire that’s hanging loose, but we suspect it may provide the answer.

Phone call for tech support is in to The Wedge Shop. And seeing as we had to drop the right catalytic converter to get to the starter (how ’bout that, according to the shop manual, you actually have to drop the catalytic converter), the next step might be to get the car to a muffler shop, remove the other one and get a better exhaust system on the car.

Next big SLTOA event is the annual picnic at the Blumenhof Winery on Sunday 7 June. Will I make the run in the TR8? It’s a toss-up, but hopefully we can get it running again before the next C&C and BSCC autocross.

The adventure continues (and BTW, Corvairs were a lot easier to work on!).

A week ago Thursday, ex-prez Creig – bless him! – was over here for three full hours, troubleshooting the electrics/non-starting-starter on the TR8 while providing yours truly with a great education on, well, Lucas electrics.Â  Regret to say, by 9 PM we still hadn’t figured out the problem, so the HSD got to spend yet another week in the garage.

If the weather cooperates tomorrow (I have to back the TR8 halfway out of the garage in order to work on it), I’ll jack it up again, R&R a couple of electrical connections and, assuming I can get to it, will pull and replace the starter.Â  If that doesn’t work, I reckon I’ll have to start thinking about getting the car towed to a shop for some serious work.

We’ll see what transpires next, eh?Â  Ah, the joys of LBC ownership… 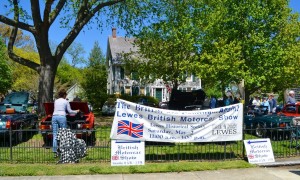 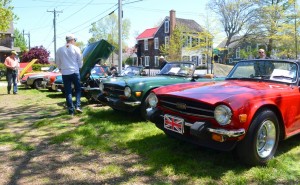 One of the neat things about the east coast is being able to run through towns which date back some 400 years or thereabouts.Â Â  Founded in 1631, Lewes, Delaware, is like a lot of these old communities in that the town has a well preserved, historic downtown area with a mix of residential and commercial. Â Â  This show, the 20th and sponsored by the Chamber of Commerce, took place among a collection of several historic structures known as the Lewes Historical Society Complex, at Third and Shipcarpenter Streets.

Now again, I was on my way to Lewes primarily to visit and document the equally historic Fort Miles, a former US Army Coast Artillery installation on Cape Henlopen (and now, appropriately, Cape Henlopen State Park); I only found out about the Brits in Lewes by pure blind luck but I’m glad I did, because it was a great show and I had an absolute ball.

I talked with event organizer Mike Tyler who’s been with the show since it’s start, he indicated about 150 cars total scattered around the historic buildings including several rarities (stand-outs included the two Rileys, an RMA and RMD drophead plus the Jensen-Healey-of-Many-Colors).Â Â  Rolls-Royce and Bentley served as the featured marques.

Anyway, I happily found parking in a lot over by the old lightship, grabbed camera and notepad and spentÂ  great two or so hours taking a lot of photos and talking with a lot of people.Â Â  More details will show up in the June Exhaust Notes with an expanded article in the next issue of The Vintage Triumph (assuming I can get this project past my boss the editor!).

By the way, Triumph clubs and/or Brit car clubs with a Triumph presence included my old buds with Capital Triumph Register (probably little-known fact, but I’m the official SLTOA rep to CTR, an honor bestowed during my visit to Bowie/Annapolis last September) and Triumphs Around the Chesapeake (TRAC), along with the British Car Club of Delaware-Southern Division; MasonDixon TRA; Positive Earth Driver’s Club (now THAT’s a great name…great logo, too); and undoubtedly several others that I didn’t write down.

Congratulations to all of the participants, the organizers and the Lewes Chamber of Commerce.Â  This was one fine show! 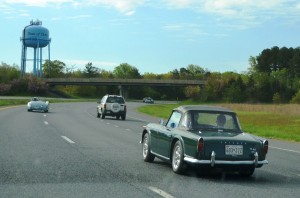 ..while driving across Delaware. Saturday 02 May, on MD 404/Shore Highway, eastbound near Denton, Maryland, about 9 AM….and an immaculate Jaguar XK120 goes booming past me in the left lane, followed almost immediately by an equally excellent TR4A.

The chase was on, with me attempting to get one-handed photos of both cars through the open sunroof of the Ford Focus rental, all the while negotiating what was fortunately light beach traffic.Â  The shot above is one of the results of my efforts.

And then I started hearing live radio feeds, “Come on out today for the 20th Annual British Car Show! What a great bunch of cars!”Â  I, of course am yelling at the radio, “Where? Where is the car show?”Â  I figured I’d probably passed the town already or it was somewhere well off my intended point of movement, maybe up north in Milford, Delaware, or well south in Salisbury, Maryland.

No, the big show was in Lewes, Delaware…and guess where I was heading this day?

Once again, for the seventh time in the last 13 months, a trip to the Bowie/Annapolis/Baltimore area, although this time around the purpose is more upbeat: the wedding tomorrow of one of my nieces.

And, amazingly, within 20 minutes of departing BWI in the duty rental car (a ’15 Ford Focus…I find I’m glad I didn’t buy one last year), a no-kidding LBC: a beautiful white MGA.Â  Unfortunately, I didn’t get a photo as I saw the car while working my way through an accident scene on US 50/301, eastbound into Annapolis.

Bad wreck, three vehicles involved including a Mercury Mountaineer that was pretty well destroyed (I pray no one was seriously injured in the collision).Â  The MGA driver, bless his heart, was pulled off to the side of the road, apparently making the 9-1-1 call.Â  I would guess he was a member of MGs of Baltimore, Ltd or MG Club Washington DC Centre.

Otherwise, also saw a really nice ’73 240Z and a Jag F-Type.Â  We’ll see what else I turn up over the next three days.