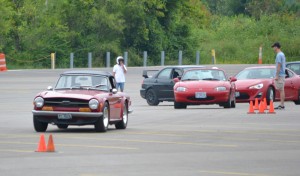 We all arrived at Family Arena in St Charles under seriously overcast skies, had some minor spritzing of rain during the first driver’s meeting (which sent all of the convertible owners scrambling to put their tops up), but afterwards the skies cleared, leaving us the perfect day for an SBCC autocross.

Several members of SLTOA competed (as usual), even had three Triumphs in the running: two TR6s and YFE’s TR8. Based on my performance today I suspect I’ll finally remember how to drive competitively in these events right about the time BSCC shuts down for another year…but it’s still fun!

BTW, the chairman of MG Club of St Louis showed up for a few minutes in advance of his club’s scheduled “B There” picnic at Babler State Park (for MGBs, natch). He even went out for a ride with the SLTOA Veep…whose TR6 proceeded to eat a traffic cone. Of such are legends made… 🙂

Running into the third week of August and holy cow, the late afternoons/ evenings hereabouts constitute perfect driving weather!Â  And, while the calendar’s going to start thinning out in a couple of months, we still have plenty of great opportunities locally to get out for some runs.

Speaking of, Greg of The Blue Spitfire Group (not quite as famous as the The Blue Man Group, but still a fun bunch), mentioned the other night that SLTOA needs to do a couple more driving events.Â  Our next scheduled one is an overnighter to Fulton the first weekend of October but I intend to check the various club schedules; we’ll see if I can ID a weekend that’s relatively free for a group patrol to some location.Â  Stay tuned. 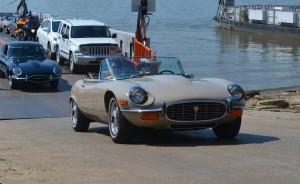 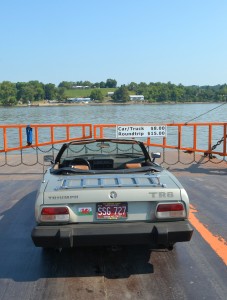 Quite a Saturday hereabouts: another huge turnout at the monthly Cars & Coffee up in Westport, with perfect weather and the usual highly entertaining variety of vehicles.Â  The ’48 Packard convertible was a stunner, as was the mid-60’s Ferrari which apparently had a racing history back in Yurp.Â  We heard something to the effect that the car was worth in the vicinity of $8 million (!).

Afterwards the Jaguar Club of Greater St Louis made a back-roads run to Pere Marquette State Park on the Illinois side for a picnic. Their route included a crossing of the Mississippi on the Golden Eagle Ferry in north St Charles County; yr fthfl ed went up there in advance to get photos of the Jaguars “coming ashore.”

BTW, while at Cars & Coffee, we of the SLTOA persuasion received a phoned-in field report from the VTR national gathering up in Wisconsin.Â  Sounds like everyone up there had a large time, stand by for a full report in Exhaust Notes.