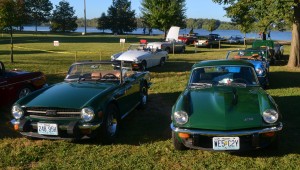 For the starters, here are the numbers for yesterday’s 34th Annual St Louis All British Car & Cycle Show: 188 registered, 181 took the field.Â  The weather was absolutely perfect, at least until 3 PM and the awards ceremony (although the ABCCS ceremony traditionally doesn’t stand much on, well, ceremony), when the clouds came in and the wind came up. Over 100 owners of convertibles nervously monitored the proceedings while also watching for any indication of rain.Â  Fortunately, we didn’t get any rain but the stampede would’ve been legendary.

Once again, the MG Club of St Louis did an outstanding job setting up and running the ABCCS and the St Louis Triumph Owners Association did an equally outstanding job with the food concession (hey, we’re allowed to blow our own horn on occasion, no pun intended).

As for the cars, a most excellent array, including a huge number of MGBs and something like 15 MGAs, the featured marque/model.Â  Elsewhere, plenty of Jags, Triumphs, Sunbeams (four Tigers, one Alpine) (one obvious question: are there any Tigers in St Louis that aren’t painted red?), Spridgets, Minis old and new (hate to say it, but the current edition of the Mini looks like a Kenworth next to the original), plus a bunch of unique vehicles including Lagonda, Singer and others.

Thus concludes the last of 2015’s “Big Three” car shows.Â  Ah, but there are still several driving events and cruises yet to come, stay tuned.

And again, well done (in Navy parlance, Bravo Zulu) to all involved and to all who participated and contributed.

While fall’s moving into the area and we’re all maybe a couple of months from parking our cars in the garage, disconnecting the battery, etc for the winter, the events continue to pile up, providing lots of opportunities for owners to go on drives, do cruises and shows, etc.Â  In fact, between now and roughly the end of October, just about every single weekend has multiple events to chose from.

Case in point, yesterday (Sat 19 June), which started with the next-to-last Cars & Coffee up at Westport.Â  Meanwhile, the Gateway Volvo gang made a drive to Marceline, MO, for their annual mid-Missouri meet-up with their KC counterparts. The clubs participated in the town’s annual celebration/salute to native son Walt Disney; nothing Mickey Mouse about the Volvo owners, though (sorry, couldn’t help myself).Â  Towards the end of the day, the Chesterfield Community Church 3rd annual car show, up at Ladue and Olive.

Concerning Cars & Coffee, another outstanding event; couldn’t ask for better weather or better company and while the numbers may have declined a bit from last month (which apparently pushed 400), it was all good.Â  As per usual, a number of cars showed up that stopped people in their tracks, such as the 1957 Plymouth Fury, complete with Golden Commando 350ci V-8 with twin four-barrel carbs (ahhhh, the good old days).Â  At the other end of the spectrum, the ’50 Crosley sedan/wagon, a regular at the Forest Park show.Â  The owner announced people regularly assumed his car was British, so he happily took a slot in line with an Austin-Healey, Morgan, MG and several Triumphs.

End of the day at Chesterfield Community, nice turnout, somewhat smallish show but it should grow over time and the hosts are certainly welcoming.Â  Again, a few standouts, including two LBCs: a Jaguar XJS and MGA, belonging to members of JAGSL and the MG Club of St Louis.Â  Plus some rods, Detroit heavy metal and other entertaining vehicles.Â  The one that stopped the show, though, was the “winged thing” that arrived late; see the photo.Â  I’m definitely planning on putting the TR8 in the show next year. 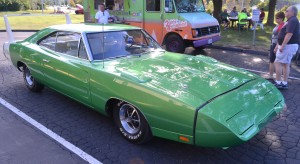 Next weekend’s one of the big ones, the annual All British Car & Cycle Show, hope to see a large turnout at Creve Coeur Lake Park (MO 141 off Marine Drive), should be over 150 cars on display.Â  In the tradition of the ABCCS, expect some surprises… 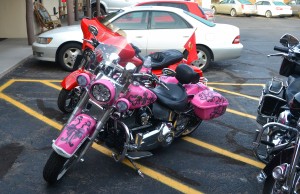 For the motorcycle owners in SLTOA, plus the duty Marine (note the flag on the rear Harley).Â  Saw these at our motel in Williams, Arizona; the pink hog is, no surprise, “Miss Piggy” 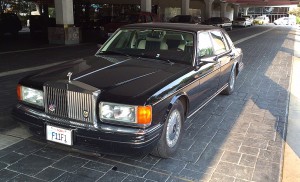 Submitted for your consideration: a Rolls-Royce, parked out of the Nugget on I-80 in Sparks.Â  The Nugget’s hosted the annual Tailhook convention every year since 1994, I started coming in 1995.Â  BTW, this classic British vehicle is undoubtedly owned by a retired Navy fighter pilot; the F11F1 license plate is the giveaway.

This marks the end of the trail; we head back to St Louis tomorrow. Darn fine road trip…

Ah, the spirit of American free enterprise: photo taken at the only real business in Amargosa Valley, up US 95 from Las Vegas en route to Tonopah.Â  Yes, the town is close to the fabled Area 51, it’s also close to the Nevada Test Site.

Read the signs over the two entrances carefully…(and if you can’t discern the rear sign, I’ll explain at the next SLTOA meeting). 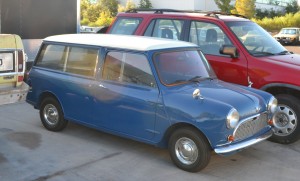 Having successfully delivered mother-in-law to her airplane at Las Vegas’ McCarran International Airport for the flight back to St Louis, YFE got a little turned around trying to leave the airport and get out of the city.

And what should appear in an industrial area at the south end of the field? A garage/auto body operation, complete with this Mini Clubman parked out front.Â  Didn’t have time to take any other photos as we had to press north, but the business’ lot held a fairly eclectic mix of vehicles.

(BTW2: Also got crossed up on the days; yesterday’s “Big Ditch” post actually concerned day 6 of this cross-Southwest run. For the record, Day 7 – a rarity, as I took no photos – was Tuesday, when we drove from Williams to Las Vegas). 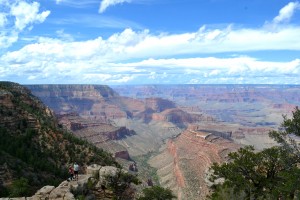 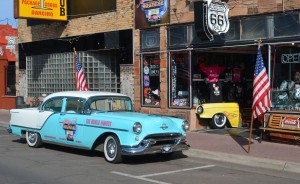 Day six in Williams, AZ; between that city (which is heavily into US 66 lore and souvenirs) and Grand Canyon National Park, the usual assortment of Minis, Jaguars and Range Rovers, but no LBCs, so we’re stuck with what’s in the photo.Â  On to Reno!

Alamogordo to Williams, AZ, 540 miles, 9.5 hours, no LBC sightings but did get in a 30-mile stretch of the original US 66 west of Los Lunas, NM.Â  Otherwise, the search continues! 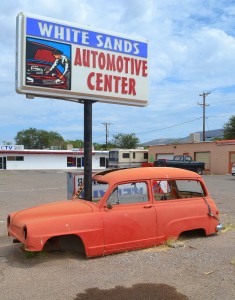 Submitted for your consideration, in Alamogordo: a Simca Aronde 1300 wagon. Yeah, she needs a little work, but other than that she’s cherry….