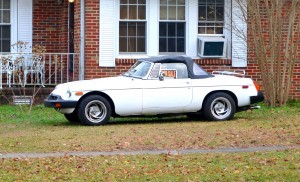 Spoke too soon: late-model, crash bumper MGB for sale in Sylacauga, AL, on AL Highway 21.Â Â  Didn’t stop to get the details but I wouldn’t be surprised if the car’s on Craigslist.

First business-related road trip in nearly three years, flew into Atlanta earlier today (always entertaining, working your way through Jackson-Hartsfield International) and drove to Montgomery via the scenic route.Â  I dumped off the freeway at Anniston, AL, and meandered on south to Alabama’s capital city.Â  Great begin on the highway again in a different part of the country, although unfortunately the trip means I’ll miss both the Triumph and Healey Christmas parties this weekend.

Anyway, as per usual, the search for LBCs continues.Â  Didn’t see any out-of-production Brit cars today, but did see a highly entertaining assortment of other vehicles, starting last night with this Honda Civic: 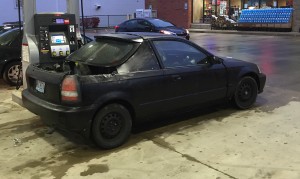 Stumbled across it at a Conoco station on Manchester. Best I can figure, it started out as a Civic hatch and, for whatever reason, the owner decided to shorten the top and move the hatch forward, leaving an open bed at the rear.Â  Note the custom B-pillar…Not surprisingly, what with the weather St Louis had over the last two days, the passenger looked pretty miserable (or mortified).

Further down the road, today in Anniston, AL, at Pee Wee Turner’s Used Cars on US 231 north of downtown, this interesting duo of VWs.Â  Turner had several other interesting cars, including a ’62 Ford Falcon and ’65 Mercury Comet sedan.Â  Wild… 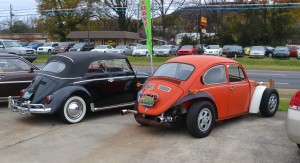 Figure on three full days in Montgomery, then off to Warner Robins, GA, for two days.Â  The search will continue… 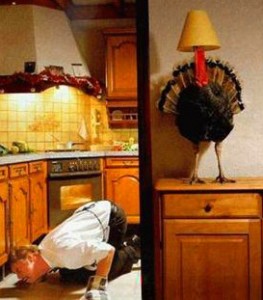 You gotta love the Midwest: Thanksgiving Day, 25 November, and while we have some serious rain/storms coming in tonight (resulting in a flash flood watch for St Louis County and the surrounding area), I was still able to get the leaves cleaned up front, side and rear of Schloss Morgan AND got the HSD out…twice!Â Â  Second time, after finishing the yard work, I told my wife I was going back outside to put the TR8 in the garage.Â  I just didn’t tell her I planned to take the scenic route…

Anyway, we’re ready to head over to one of the cousin’s house for the traditional family gathering; no surprise, there are a lot of cars in our development right now as other families gather, a scene repeated everywhere around this great country of ours.

To all who read this blog, I hope you have a fun and blessed Thanksgiving with your loved ones.

Tuesday night (the 24th), got home from work early enough to enjoy a couple of hours of remaining daylight.Â  Despite my desire to the TR8 out one more time before winter truly set in, I figured my time would be better served by cleaning the leaves off the lawn one last time.

Mulled over this incredibly difficult decision for about 15 minutes…

And it turned out to be an absolutely perfect night for a drive.

Thereâ€™s a new open-top sports car on the blockâ€¦.sort ofâ€¦

On Wednesday, 18 November at the Los Angeles Auto Show, Fiat debuted its new 124 Spider, marking the return of the model to the US market after a 33 year absence (following Fiatâ€™s abandonment of the North American market, Pininfarina sold the car as the Spider Azzura, through 1985).

A joint project with Mazda, the carâ€™s built in Hiroshima and is basically an MX-5 with Fiat-designed body and engine.Â  The mill is turbocharged 160 bhp 1.4L, the same engine found in the Fiat 500 Abarth (by comparison, the original 1967-1973 series of the 124 Spider had a 1.4L carbureted engine which developed 89 bhp). It has some styling cues from the original car, particularly up front, but is still readily recognizable as a variation of the new MX-5 with exactly the same interior.Â  In fact, Road & Track referred to it as a â€œâ€¦fancified turbocharged Mazda Miata.â€

The car should reach the local dealerships next summer.Â  Fiat hasnâ€™t announced the pricing yet but R&T expects itâ€™ll come in higher than the MX-5, which runs from $24,955 up to $31,270 for the top-of-the-line model with slushbox.Â  Weâ€™ll see how this works out for Fiat-Chrysler but imagine that after a few years of offering only 500 and 500 variants, the Fiat dealers in the region are pretty excited.

BTW, there are three or four original 124 Spiders running around greater St Louis, you may see them on occasion.Â  No local club, though; there is a fairly loose-knit regional group for Fiat/Lancia owners called the Roaminâ€™ Chariots covering Missouri, Arkansas, Kansas and Oklahoma..

Full disclosure: The editor autocrossed 124 Spiders during the early 1970s and bought one when he transferred to Southern California with the Navy in the spring of 1981.Â  It holds permanent status as the worst car heâ€™s ever ownedâ€¦

Yesterday (Sunday) SLTOA did its third annual Veterans Day Drive, down to Chester via a combination of Bluff Road and some more challenging routes, across the river to Perryville, lunch at Stonie’s Deli and then home.

We done good: about 15 SLTOA members and 10 cars, constituting a pretty eclectic mix: three TR6s, a TR8, one each Spitfire and GT6, plus a Morgan, Corvette, BMW Z3 (the “Triumph Support Vehicle” or TSV) and a Ford Fiesta.Â  Combine with good weather and equally good road conditions and we had a ball; plus, we raised a fair amount of money for The Purple Heart Foundation, this year’s designated veterans’ support organization.

On the down side, once we got south of Prairie du Rocher, we found IL 3/Bluff closed, apparently due to bridge replacement on the Kaskaskia.Â  On the plus side, two members immediately fired up the map functions on their cell phones and came up with a detour that put us back on track for Chester and the requisite photo stop at the Elzie Segar Memorial Park where we posed with the statue of Popeye.Â  In fact, the detour route proved so enjoyable it’ll get added to next year’s route. 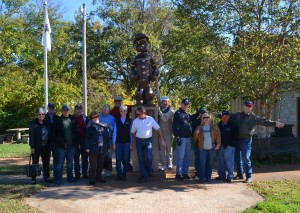 All in all, a great day for a bunch of British sports car owner/enthusiasts to get together for a drive, good company, excellent scenery and good food.Â  Thanks to all who showed up and particularly all who contributed to The Purple Heart Foundation. 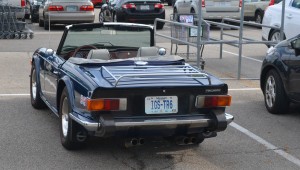 The 1974 TR6 of SLTOA’s own Iggy, at a local Schnucks.Â Â  Iggy said he was taking advantage of the incredibly great weather while also doing a final test drive in advance of tomorrow’s SLTOA Vet’s Day Run.Â Â  As if often the case with our LBCs, after he went into the store a couple of people came over and ooohed and aaahed over his Triumph.

I did my own test drive with the HSD later this afternoon, following a quick check of tires, fluids, belts, etc.Â Â  While at a Conoco up on Manchester a woman came up to me and stated she had a ’76 TR6 in her garage which had belonged to her late husband.Â Â  Prior to his passing he’d recommended she go ahead an sell the car, but apparently their 24-year-old son declared he wanted the car.Â Â  I provided her with info on SLTOA and strongly recommended she and her son join us at a meeting some time.

Then a gentleman pulled up in a Ranger Rover (“Hey, they’re both British!”), commented he’d formerly owned a TR3 and asked if I’d start up the TR8 “…so I can hear that V8 sound!”Â Â  I, of course, obliged…

Life is definitely good…and a lot more fun with a Brit car!Â Â Â  Now, let’s see what kind of turnout we get for the vet’s drive tomorrow…

Excuse me while I set the rant mode to “active.”

We had a couple of days of rain last week, including one evening where the stuff really started coming down, during rush hour.Â Â  That resulted in the classic situation where the sky and road effectively merged into gray, a combination of the precipitation and the rooster tails and spray kicked up by vehicles.Â  As was typical around here, the accident reports started coming in on KMOX 1120, all of the major freeways plus secondaries like 141; I counted something like seven active accident scenes at one point.

And yet, there were plenty of drivers on I-44 westbound rushing home, headlights off, speeding, quick lane changes (usually unsignaled), jockeying for position, etc.Â  As I stated in an email that went out later that evening, more than a few drivers who apparently a) had great confidence in their abilities, b) an unfounded confidence in their ability to stop quickly – and under control – on slick roadways, and c) thought they were doing try-outs for the Blue Angels or the Thunderbirds.

I love the Midwest, thoroughly enjoy living in St Louis, but I’ll tell you, some of the driving habits I see around here are flat-out unbelievable.Â  I’m surprised there aren’t more accidents.

Walked out my building today (no windows and thus no idea what’s going on outside) and was surprised to find solid overcast with a threat of rain.Â  Cripes, I thought the duty weather guessers had said no rain until Thursday at the earliest.Â Â  Ah well… 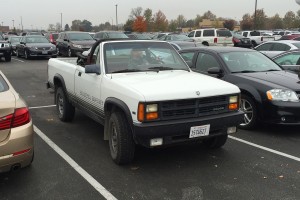 BUT, one individual out in the parking lot didn’t let the weather/clag/threat of precip throw him off.Â Â  Presented for your consideration, one of those pretty rare convertible pickup trucks, in this case a modified Dakota (seems to me they were a dealer-offered option some years back but I can’t remember who did the conversions…ASC or similar?).Â Â  Admittedly not a sports car but hey, you gotta admire someone who’s willing to put the top down on those less-than-perfect days.Â Â  I fully expect he enjoyed his drive home… 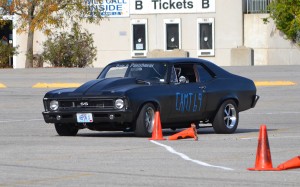 For the SCCA, a pretty eclectic mix of cars, including the early 1970s Ford Maverick – subtly modified for autocrossing), as well as an even more startling late 1960s Chevy Nova. The latter has a Chevy 408 in it (shoot, I didn’t even know there was a Chevy 408; apparently it’s one of the LS-series engines) and reportedly the owner/driver is a former drag racer who’s decided that driving around pylons at a high rate is also fun.

As for the BSCC crew, it was pretty foggy and cool in the AM, but by the time the first car went through the the starting gate we had severe clear and temps were rising.Â  A lot of Mazdas running around the Family Arena lot, the Maverick (gee, that guy gets around), a couple of BMWs, Subarus seemingly by the dozen and… 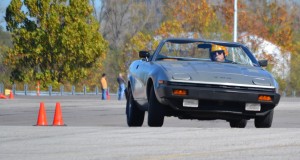 One Triumph, among the four entrants from SLTOA; otherwise, the club’s Slow Roller Racing Team ran two Corvettes and a Ford Fiesta but hey, club member Lee showed up in his red TR6 and made a couple of runs as a passenger.

Anyway, great fun as always and a good way to finish a highly entertaining autocross season.Â  The festivities should resume next April or thereabouts.