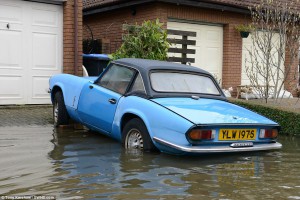 Hopefully all who read this are getting through the multi-day non-stop round of rain and thunderstorms without any major issues (we’re not, at our home, but so far we’ve managed to keep the basement from completely flooding, primarily through monitoring and mopping every 30 minutes, plus two-hour shifts overnight).

If you’ve read the news, Yurp’s having similar problems, including massive flooding in York, England.  The photo above came from The Daily Mail and shows a somewhat wet Spitfire in Thorp, Surrey.

On the plus side, at the moment (Mon 28 Dec/0916L), the back end of this front is now over by JeffCity/Columbia, so we should see an end to the rain by the end of the day.  Then again, we’re also finally going to get some seriously colder temps.  Wonder if I can get the TR8 out Wednesday after work….sounds like a good opportunity to determine if the Wedge’s heater actually works (the dear departed Red Rolling Parts Car did NOT have a heater, made things entertaining). 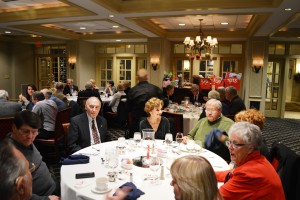 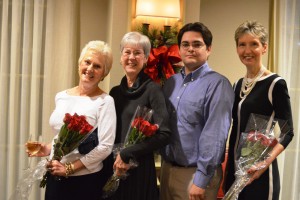 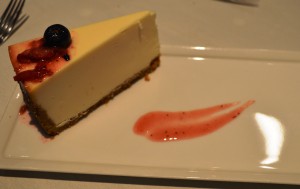 As mentioned previously (I think), yr fthfl ed wasn’t able to attend the Christmas party this year – held at the Missouri Athletic Club-West, Friday 4 December – due to my Air Force TDY. From all reports, it was a great gathering with good turnout, a lot of fun and a lot of good food. Our thanks to event organizers Bonnie David, Kathy Kresser and Ann Stark; Joe and Sharon Guenther for arranging the MAC-W accommodations; event photographer John Moore; and all others who attended and contributed. LBC’ers do know how to party!

System was down for a few days, hence no posts over the past two weeks. Fortunately, our ace webmaster was able to debug the system and this blog is back up and running, Expect a couple of posts over the next two days. 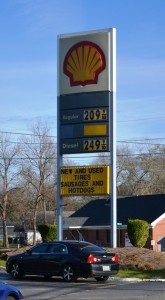 Finished up at Maxwell AFB (Montgomery) earlier today, in the AM I’ll take the cross-country Triumph/LBC search on the road and head in the general direction of Warner Robins, GA (I know, I know, if I hit a large body of water – at least one bigger than the Chattahoochee – I’ve gone too far).Â  Should be back in St Louis late Sunday night.

BTW, there are Brit car clubs down this way.Â  The Alabama contingent includes the South Alabama British Car Club down on the Gulf Coast.Â  This group hosted it’s 25th Annual British Car Festival in Fairhope back in late October (hmmm…a bit of a drive from St Louis BUT, considering how much I enjoyed the FL panhandle and Alabama Gulf Coast when I lived down this way, it might be worth the effort).

Their Northern Alabama counterparts – appropriately named the North Alabama British Motoring Society – are roughly centered around Decatur and Huntsville and include members from the southern part of middle Tennessee.Â  They also have a big show each year, the EuroBrit Auto & Bike Expo, in June.Â Â  Then there’s the Shoals British Car Club in Florence/Muscle Shoals, in the northwestern part of the state. This last September the club sponsored its 19th annual Brits of the Shoals gathering.

All three sound like pretty active groups and each has a web presence, might be worth checking out on a future run down this way. As for Georgia LBC clubs, stay tuned….