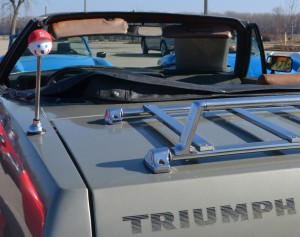 A couple of items: one, the HSD definitely shifts easier with the proper shift knob.

Lest I didn’t mention it earlier (several of the Polar Bear group heard the story), after leaving church last Sunday I initially got on I-64 westbound, heading for the Polar Bear start point at the Lewis & Clark Boat House in St Charles.  While transitioning to I-270 NB, the aftermarket shift knob came clean off (the upper part of the shifter broke off, inside the knob).  Figures, the only wood (or at least well simulated wood) item in the truly 1980s, all hard black plastic interior of the TR8, and I had to scrap it.

Well, at least until I get a replacement and re-thread the end of the shift lever.  In the meantime, O’Reilly’s had a reasonably good assortment of reasonably priced shift knobs in the bling aisle.  Have to admit it, I came close to getting one of the neon screaming skull knobs but settled on a more mundane 8-ball.  Don’t tell anyone, it actually looks pretty good.

Second item: it was just too darn nice this weekend not to get out with the LBC, eh?

Short entry tonight…we matched last year’s record turnout with 28 cars, about 40-45 people total and quite a variety: besides multiple Triumphs, today’s Polar Bear Run included Corvettes, Jaguars, a gaggle of Miatas/MX5s plus a few other vehicles including a Kelvinator-white toaster, er, Scion.

More details to follow – particularly in the March Exhaust Notes – and what with four participants taking photos, there’ll be plenty of shots available over the next few days.

My complements to SLTOA Vice President Steve Moore and club webmaster Stephen Paur (aka “Sacco & Vanzetti”) for the outstanding job of setting up this event.  Thanks to Andy, Adrian and Steve for serving as ace photographers. AND, thanks to all who made the run; the bear’d be proud!

Yup, incredible: third weekend of February, temperature’s right about 75, skies are clear, had to get the HSD out of the garage for about 45 minutes of pre-Polar Bear road testing. Everything seems to be working properly, should be a fine drive tomorrow.  Oh, and no surprise, plenty of convertibles out there today with their tops down.  A lot of contemporary vehicles but I did pass a really nice 68-73 ‘Vette and yes, we exchanged waves.

As for SLTOA’s big annual first drive of the year, tomorrow, meet time is at the Lewis & Clark boathouse on the riverfront in St Charles at 10 AM.  Figure on about 72 miles with three stops for photos/breaks/whatever, followed by a late lunch at Culpeppers at I-70 and Zumbehl.  The NWS is calling for more severe clear, albeit with temps in the mid-50s; have already heard back from one SLTOA member who complained it wasn’t cold/slick/messy enough for a REAL Polar Bear and as a protest he’ll probably drive his car with air conditioning.

Last year’s Polar Bear drew a wide variety of 28 vehicles, we’ll see how we do tomorrow.  As per usual, the event tends to bring out some truly unique cars; if you have one (or even if you don’t), how ’bout coming on out and joining us?

Short one…about two hours ago I returned from the first run over a planned rallye course, had a ball.  The local owners/enthusiasts of Chevrolet’s “rear-engined wonder,” the Show-Me Corvair Club, is planning their 2nd Annual Spring Rally for 7 May and I volunteered to come up with the route,

In advance of the expected 1-2″ of snow, made the 80+ mile drive, from planned starting point to the planned end point.  Again, something of a gray and cool day but the roads were dry and clear, making for a fun and entertaining couple of hours.  I expect I’ll get out a couple of more times to check the route prior to the actual event.

Regret that the aforementioned snow put the kibosh on tomorrow’s scheduled SLTOA “Polar Bear Run” (talk about traditions; the Triumphs have been doing this season-opening event for 34 years now).  BUT, next weekend looks incredible, severe clear with temps pushing 70, so we’re going to try again on Sunday the 21st.  Details are on the SLTOA website at www.sltoa.org, check it out and join us! 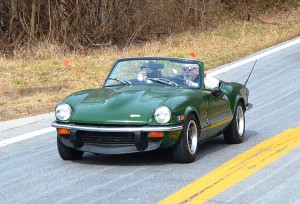 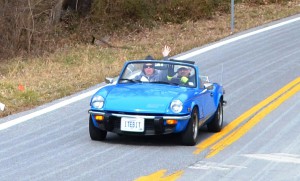 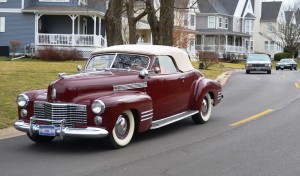 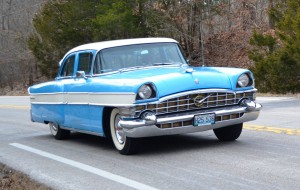 Last Sunday the Jaguar Association of Greater St Louis held their (presumably) first annual “Blue Line Roads, Fried Chicken & BBQ Pork Steaks Rallye,” down to Washington and back.  Yeah, it was a tad cool (mid-30s, IIRC) and yeah, the clouds eventually came in, but hoo-hah, what a great drive and what great fun.

Something like 20 cars and 40 people (or thereabouts) participated, including a strong contingent from the Gateway Miata Club plus a couple of three rather different vehicles, two of which are shown above.  AND, two Triumphs made the drive: John and Donna in the Spit6 and the Rieman’s in their Spitfire.

The Hendrix’s and the Taxmans came up with an excellent route with two good stops.  The Knights of Columbus hall in Washington for fried chicken and BBQ pork steaks constituted the first stop, while a visit to Head’s Store in St Albans provided the participants with an opportunity for pie, coffee and ice cream.

My complements to the organizers and JAGSL on the proceedings.  This was a particularly good drive.