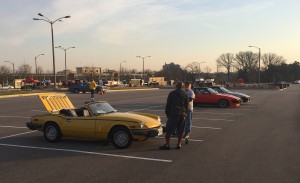 The Horseless Carriage Club of Missouri’s Easter Concours returned to the parking lot of the Muny today and fortunately, we didn’t get any of the expected rain until most everyone had left the lot, somewhere around 1500L.

And, this event featured the resumption (after last year’s layoff) of the Triumph-MG participation challenge.  Have to complement our buds with the MG Club of St Louis, they retained the trophy in good fashion, putting 28 cars on the field of competition vice SLTOA’s 22.  As it stands now, in seven years, it’s MGs 4, Triumphs 3…but we’ll even things up next year, eh?

A couple of final comments, in advance of coverage in the April issue of Exhaust Notes. Not near as many cars in the lot as two years ago; the newly re-graded and repaved parking area for the Muny had several empty rows, unoccupied by special interest vehicles. Also, at least early in the afternoon, the crowds seemed down a bit from previous events. Still, the show remains one of the highlights of the St Louis automotive year.

BTW, concerning cars representative of the St Louis Sports Car Council member clubs, besides the 28 MGs and 22 Triumphs, the Notes‘ ace photographer and the editor noted one Volvo, two BMWs, one Jaguar, two Morgans and at least one Austin-Healey Sprite. 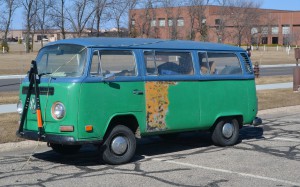 Third and last full day at KRDR, other than the Mini haven’t seen an LBC.  However, I did see this other classic (?) out in the parking lot this morning…

Will do one more patrol tomorrow for about five hours, in advance of returning to the airport for the flight home.  Looks like I’m going to make the Gateway Healey Association’s annual “Wash-Up/Tune-Up” Saturday, in advance of Sunday’s Forest Park Concours, yee-haw! 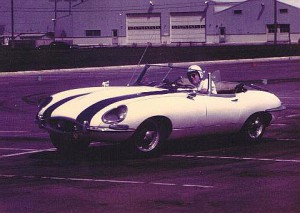 No idea when this club gave up the ghost, a Google search didn’t turn up anything recent but apparently 50 years ago it was quite active.  AND, I do know one of the members/autocross competitors, contacted him last night (retired Colonel, USAF, one each) and he sent this photo of him in his E-Type during one of the events.

In a follow-up email, Charlie noted he’d also autocrossed a Sunbeam Alpine and his ’69 Alfa Romeo, which he still owns (“Was fun beating Porsches in an Italian car. I won one high speed event in Omaha put on by the Porsche club – fastest four cylinder time – but my trophy said ‘Fastest Non-Porsche'”).  While at Grand Forks he also regularly participated in rallyes, hill climbs and ice races.

The Morgan family arrived at Grand Forks AFB in late May 1966, the result of a transfer from McCoy AFB, Orlando, FL, for dad’s assignment to the 321st Strategic Missile Wing with LGM-30F Minuteman IIs.

As it turns out, the base and city at that time had a very active sports car club, appropriately named the Grand Forks Sports Car Club.   According to the Peace Garden Trident, the base newspaper, gymkhana season was well underway, with a pretty good assortment of cars competing at multiple events.

For example, on 3 July in the parking lot of the headquarters for the 319th Bombardment Wing (Heavy), an individual named Charlie Bone took the best time of the day in his Porsche 356.  Ken Rotz won Class D in a Triumph TR4A, Bill Adams took Class E in a Porsche, Lynn Breax won Class F in a TR3 and Ted Fields won the sedan class with a Saab.

More events, more interesting cars, including Sprites, MG Midgets, a Vauxhall (you have to assume the owner, Ronald Olson, was an Air Force member who brought the car back from England) and an E-Type.   At the 21 August event held at the old municipal airport, John Goulart took Sedan 1 with a Mini Cooper, with Jim Halloran set the best time in Sedan 2 with a Volvo.

BTW, the following really summed up life in North Dakota, particularly during the winter.  In reporting on a 8 January rally, the paper noted only two cars finished, due in part to the “…minus 30 degrees temperatures and blizzard like conditions.” 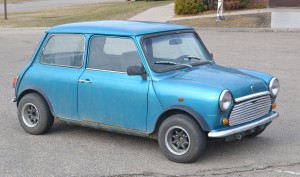 Well, that didn’t take long…on my way to work this morning at Grand Forks AFB, I stumbled across this Mini. Rather tired and with rust in several locations, but still pretty cool. Looked inside, the main instruments were mounted in the more traditional position behind the wheel, vice earlier Mini’s centrally-located gauges. Mid-to-late 90’s example? Your guess is as good as mine. 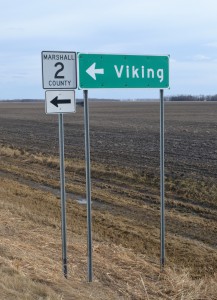 Off on another LBC patrol, this time in and around Grand Forks, ND, one of my favorite places on the planet, dating to 1966-1970 when we were stationed at the air force base.

Today’s excursion, post-landing at KGFK, involved a quick run across the Red River of the North to Crookston, then north to Thief River Falls and return. No joy yet on the LBCs, but did a really nice ’72 240Z in one driveway. Hopefully I’ll see something over the next four days. In the meantime, I’m enjoying a typical NoDak spring: highs in the low 40s, lows in the mid-20s, perfect…

Right now, will return to St Louis Saturday night. Sunday’s two church services and the Forest Park concours, should be quite a day.

Yeah, got the TR8 out again last evening for a grocery run (via the scenic route, natch). Had to; the weather just too good to leave the car in the garage.

I think most of us have had the circumstance where someone walks up to your car and makes appreciative comments.  Occasionally, we hear “I used to have one of those,” although I suspect more often it’s “I haven’t seen one of those in years” and, of course, “Wow, what kind of car is that?”

Best question/comment I’ve received lately?  I stopped at the ZX on Manchester and the owner of a late model Audi A7 meandered on over and asked, “Hey, is that a Toyota?”