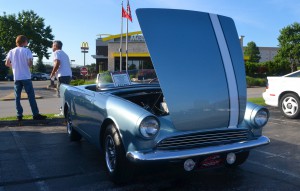 Anyone interested in a Sunbeam Alpine Speedster?  The car was on display at the last Cars & Coffee, courtesy of Fast Lane.  Only $29,995. 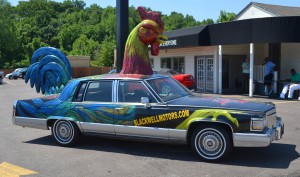 Blackwell Motors of Bonne Terre (and of large pink elephant fame) made a brief appearance at a car lot on Manchester down the hill from I-270 last week, I suspect they were testing the local car sales waters.  As of tonight (Tuesday), the lot’s empty once again, probably until some other dealer gives the location a shot. 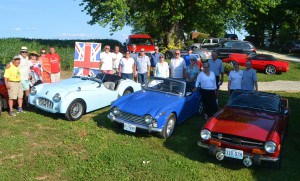 A tad warm yesterday but doggone, seven TRs, one MGB, a few brand Xs (including the official camera vehicle, which is Korean), 22 people participating (or was it 26?).

SLTOA set off from Westport Village, up to the Golden Eagle Ferry and then on to Brussels and the famous Wittmond Hotel for an early dinner. Afterwards, everyone returned home via whatever route they desired, with several using the Grafton Ferry to get to Alton and points south.

Next up, the SLTOA annual picnic, Sunday the 19th at Ferris Park. 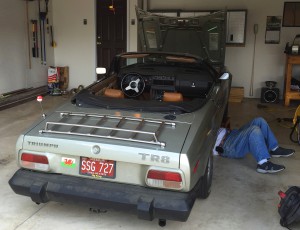 Spent Saturday morning with John the Marine out north of Wentzville, we put the HSD up on ramps, poked, prodded, evaluated, etc.  After he heard me start the car a couple of times, his verdict: possible/probable damage to the teeth on both starter and flywheel, time to replace the starter, flywheel and clutch.

Which we’ll do w/in a couple of months, probably after I get back from Texas.  Ah well, I may still fire the car up for Cars & Coffee next weekend but otherwise, time to resume my acquaintance with British Parts Northwest…

Then again, a 20-minute drive in the HSD still manages to cure all ills, or at least make me forget about them! 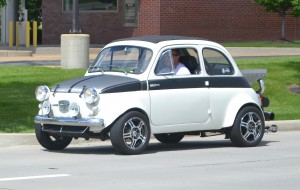 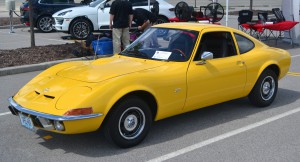 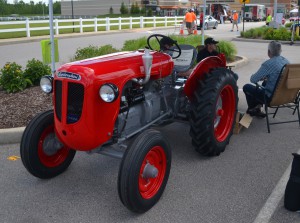 As most are undoubtedly aware, the annual European Auto Show took place last Sunday, second year at the “new” Taubman Prestige Outlets venue out in the Chesterfield Valley.  Yr fthfl ed failed to make the show last year and heard a few horror stories, including lack of shade (well, give the shrubbery a few years) and general disorganization.

This year, it looked like the organizers of the show got several of the bugs worked out. Plenty of people (volunteers? dealer employees?) were around to help guide the cars in and yes, there was still a heavy commercial component provided by vendors, but overall the event seemed to go pretty well.  Shoot, even the temperature was reasonable under severe clear skies.

Based on unscientific observation, it would appear the Jaguars, BMWs, Porsches and Ferraris were most numerous and several other marques – Mercedes Benz, new Mini, Alfa Romeo, Lotus, Lamborghini – also had more than a few examples on display.    Sad to say, didn’t see any Triumphs and only two MGs took to the lot, but some of the one-offs proved fascinating, including an immaculate Opel GT (didn’t know we had one running here in St Louis).

Anyway, not a bad job this year and always an entertaining diversion.