Sighted yesterday (Thursday) in Monte Vista, CO, along US 160.  Yeah, it might need a little work… 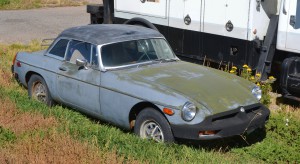 BUT, there was this…Monument Valley, UT. 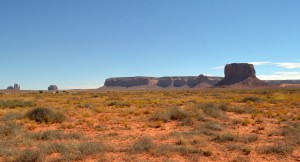 Anyone who’s seen the John Ford cavalry trilogy, “Cheyenne Autumn” or a number of other movies should be familiar with this locale. 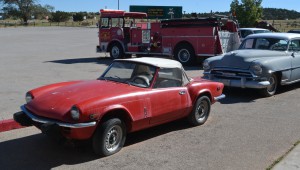 Even further west on US 66, at Grand Canyon Caverns Inn – which incorporates a gas station (“Radiator Springs Service”), motel, mini-golf and access to the caverns – stumbled across this, oh, post-74 Spitfire in exceedingly poor shape.  First Brit sports car seen this trip; most of the Route 66 towns and attractions have numbers of old cars scattered around, so who knows, I may see another Triumph during this excursion.

BTW, couldn’t lift the hood of the car but I did check inside: it had an automatic transmission.  Looked vaguely like something out of a 1972 Ford Pinto… 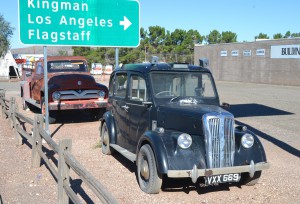 Ah, but at the west end of Seligman, this find: an early Austin London Taxi, parked in front of a convenience mart.   The plywood tipis to the rear provide a nice touch. 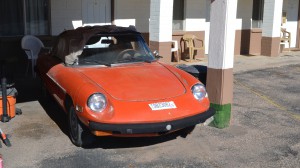 Drove the longest remaining original segment of old US 66 yesterday, Ash Fork to Needles, CA, plus a few miles in the Golden State.  In and around all of the old US cars scattered around the various towns, I saw my first European, uh, “exotic:” an Alfa Romeo Spider, part of the display at Romney Motel in Seligman.  Looks like it might need a little work… 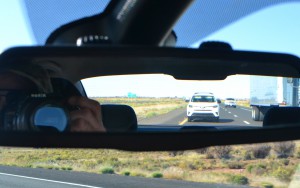 Dang, I’m being chased by an Imperial Storm Trooper

Yup, the editor’s on the road; greetings from old US 66 in New Mexico.  I’ll be on patrol for the week, looking for LBCs in general and Triumphs in particular, stay tuned. 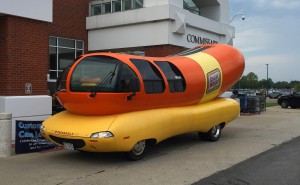 With the HSD still up on jacks, I’ve arranged for an alternate vehicle for the next BSCC autocross… 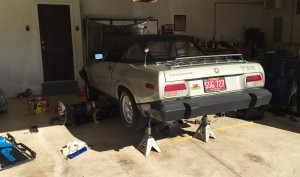 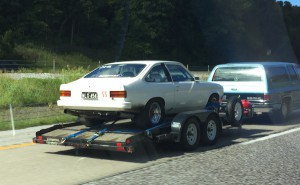 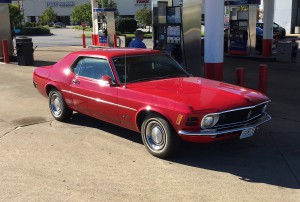 Spied over this past weekend.  Car No. 1 – the white one on the trailer – was sighted on I-44 eastbound Saturday afternoon.  As we pulled into range I thought, “Hmmm, a much-modified Vega” (look at the roof line and the b-pillar/rear side window layout). However, between a good look at the back end and a quick look at the grill, it was obviously not a Chevy Vega.

What was it?  The twin exhaust pipes steered me in the right direction (no pun intended): a Holden Torana, product of GM’s Australia division, circa 1976-1978 and equipped with several engines ranging in size from an Opel-source 1.9L four up to your choice of a 4.2L or 5.0L V8.  Oh, and Torana’s featured in one of the great movies of all time: “Mad Max.”

So when was the last time you saw a Holden in the US?

As for the second photo, perhaps a tad more mundane but not really.  At the ZX station on Manchester east of Weidemann, an immaculate – if plain – ’70 Mustang notchback.  Talked with the owner, a Navy veteran of the Vietnam War; he said he’s the original owner (!) and the car just rolled over 270,000 miles (!!),

Like I said, somewhat plain, but nice and thankfully, not heavily modified with wing, etc.