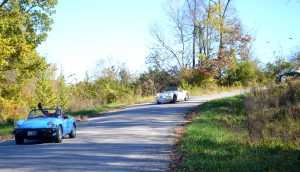 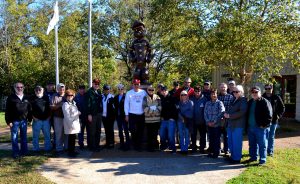 One week following the autocross, SLTOA held its 4th annual Veterans Day Run, a 200+ mile drive to Chester and Perryville and back which raised money for The Purple Heart Foundation, one of a number of veterans/vet’s family support groups.

Taking advantage of the great weather (still!), this drive constituted the biggest effort yet, with 20 cars and approximately 30 people from various local clubs.   Everyone had a great time and enjoyed the route, particularly the new early section designed by SLTOA President Steve Moore.

To all who participated, our thanks.  We will do it again next year.

Am coming off an unplanned multi-week layoff with the blog, due to technical issues (which is a euphemism for “I forgot the password”).  It’s now a couple of days after Thanksgiving and as per usual, driving in the vicinity of complexes like West County Mall and the two outlet malls in Chesterfield Valley is an activity only for the strong of heart (BTW, anyone else notice how many people go barrelling into intersections without noticing the traffic in front of them isn’t moving, thus blocking the intersection when the light changes?  It’s a seasonal epidemic…).

Having said that, 6 November, a large number of drivers and cars gathered at Family Arena for the end-of-season autocross.  The weather was perfect and a total of seven from SLTOA competed as members of the Slow Roller Racing Team, including “Jake the Rookie” Thoma, who made his first appearance with the group.

Best comment of the day?  The ride-along who went out with Prez Esteban and, halfway through the run, stated, “You can let me out now.”  To Steve’s credit, he kept the hammer down and finished the lap.

Full results in the December edition of Exhaust Notes, which should be out second week of December, following SLTOA’s annual Christmas party.