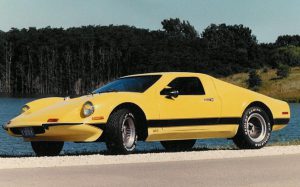 Second night now of cold and incredibly slick conditions here in St Louis, although tonight we also have some snow on the way (great, snow on top of roughly 1/4 inch of ice, should be particularly festive tomorrow).  Last night, my normal 1+15 commute home from Scott AFB took 4+30 but, fortunately, I managed to get the Kia into the driveway without hitting anything or anyone.  Prez Steve said it took him something like two hours to get home, adding I-44 at Antire Road was an absolute mess.

From glancing at the local news a couple of minutes ago, it appears we’ve had another large number of accidents locally, sadly including a fatality on I-255 on the other side of the river.  The good news is, once this snow passes, it’ll be mostly clear for the next week or so BUT, severe clear weather means particularly cold nights.

BTW, while crawling past Plaza Frontenac last PM, I did see something different pulling out of the mall lot: a Kelmark GT.  A running Kelmark GT, bright yellow, complete with sliding plexiglass side windows and thundering VW engine hanging out the back.  Tried to get a photo despite the dark, slick conditions but wasn’t quick enough…maybe I’ll run across it again.

Coincidentally with the HSD’s latest problems, I noted in Hemmings this morning: a ’74 TVR 2500M in Asheville, NC. 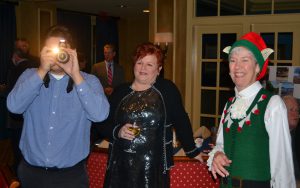 Darn fine gathering of the Triumph (and MG…and Austin-Healey) faithful at the Missouri Athletic Club-West Friday night for the annual SLTOA Christmas Party.  In and around the usual great surroundings, service, food and drink, we had a strong turnout; lots of good conversation and the gift exchange – organized by “Mrs Santa’s Little Helper” (Bonnie) proved hilarious as always.  AND, yes, a good number of people did stick around until late in the evening.

Came Saturday and yr fthfl ed tackled the garage and back deck, hopefully in advance of NS winter weather.  Also put up the Christmas lights…now, in order to get to the ladder, I had to move the TR8. In order to get to the TR8, I had to move a temporarily stored bookcase.  Did same and figured while I was at it, I’d put the top down the car, fill the radiator catch tank and take it out for a very quick (undoubtedly last-of-the-year) drive.

Hooked up the battery, hoped in, depressed the clutch…and it went right the floor, no resistance.  Rut-ro…checked the clutch master and it was dry (!); added brake fluid and pumped for nearly five minutes, then topped it again and was able to get the car into reverse and out of the garage.  A good, short drive ensued.

However, as part of fall’s major mechanical work, we installed a new master cylinder, blew out the line and rebuilt the clutch slave cylinder.  That alone took care of one of the car’s major leaks BUT, obviously, there’s a gremlin in the system somewhere. Something else I’ll have to look at when I get the car up on jacks for its radiator change in the spring.