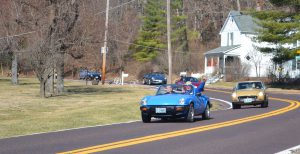 Good grief, what a day and what a drive!  Severe clear and the 38 cars/roughly 50 participants in SLTOA’s annual Polar Bear Run enjoyed temps in the low 70s.  We had a great course, a few challenges, one sequence of multiple LBCs and other cars locking all four wheels (with appropriate sound effects and smoke) and a great meal at the Big Chief on old US 66 way out west.

Watch for more details in the March Exhaust Notes.  For starters, I need to look at the back issues to see if we set the record for number of cars (the run to New Haven two years ago also turned out a lot of vehicles and participants) and the record for warmest temperature for a Polar Bear Run.

Our thanks to the MG Club of St Louis for turning out a good number of people and Morris Garage products, and thanks to everyone else who made the drive…particularly the brother of SLTOA’s veep, who drove his ’66 Impala coupe. Wow… 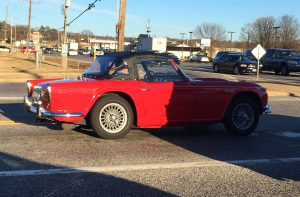 There are two red TR4As in SLTOA’s “collection;” stumbled across this one at Manchester and Weidmann this afternoon, right about 1630, getting ready to turn east onto Manchester.  Didn’t get a good look at the driver but, last we heard John’s still finishing the restoration of his TR4A, so I assume this one was Dave’s.  Anyway, great seeing a Triumph out taking advantage of the incredible, unseasonably warm weather.

Speaking of, if you’re in the St Louis/Metro East area, two great opportunities this weekend to take advantage of this weather.  Tomorrow morning, the Westport Cars & Coffee kicks off (a full two months earlier than usual!); should be interesting to see how many cars turn out.  If you’re not familiar with the location, as indicated the meet’s at the south end of Westport Plaza (north of Page), big parking lot across from McDonalds.

On Sunday, the annual St Louis Triumph Owners Association Polar Bear Run, the latest iteration of a club tradition which dates to 1983.  This is the club’s standard first drive of the year and what with temps around 70 by early afternoon, there’s no excuse for leaving the top up on your car.  Meet at the southeastern portion of Chesterfield Mall in front of Sears at 11 AM, cars should roll about 11:30 and there will be a lunch stop in the middle of the drive, at the famous Big Chief on old US 66/MO 100/Manchester west of 109. Y’all come!

On 10 February 1895, John Paul Black was born in Kingston-Upon-Thames, England. Following service with the Royal Tank Regiment in The Great War, he joined the Hillman Motor Car Company as a sales manager, followed bhy a 1919 promotion to director. He left Hillman in July 1929 and in September, took a position as Joint Managing Director at Standard Motor Company.

And, at the end of World War II, Black – who was knighted in 1943 – put together Standard’s acquisition of the ruined Triumph company, thus saving the Triumph name. He subsequently led the charge which resulted in the production of the Triumph 1800 and 2000, followed by the TR2. Forced into retirement in 1954 (officially for health reasons), Sir John eventually took up farming. He passed in Cheadle, Cheshire, on 24 December 1965 at age 70.

In honor of the man who saved Triumph and put it in the position to successfully produce sports cars and saloons for an additional 35 years, today was the annual Sir John Black Birthday Drive. Obviously, we lucked out here in St Louis: clear and temperature pushing 70; I managed to get the HSD out for a few minutes without dumping any fluid (trust me, the radiator will get swapped out) and generally had a high old time.

Others around the country (world?) are sending their photos in of their drives (or, photos of their Triumphs buried in snow) for publication in a future issue of The Vintage Triumph. 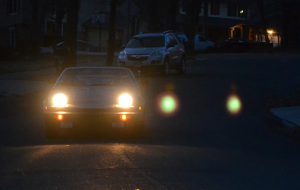 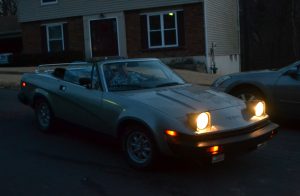 Now, I wonder if anyone else in SLTOA managed to get their TRs out for an excursion today… 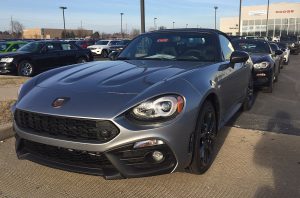 Anyway, while out in O’Fallon Sunday the 5th I noted four of the new Fiat 124s – aka the “Fiatas,” for their status as variants of the Mazda MX-5, built in Japan (albeit with an Italian engine and some different chassis tuning).  First time I’d had a chance to see the new cars and I have to admit, up close, they’re pretty good looking, although as with most modern cars they tend to overdo the front end plastic/scoop thingie.

The big question is this: the new 124s have been offered for about four months now.  How come we never see any on the road?  Is puzzlement… 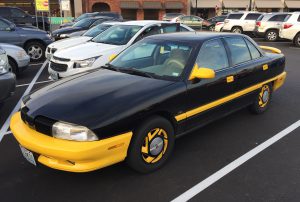 Spied in the parking lot of Dierbergs on Manchester (the one west of MO 141), Sunday afternoon, 5 February.  One of two things: the owner of this Oldsmobile felt obligated to pay homage to the noble bumblebee…or he/she’s a Pittsburgh Steelers fan.