Quite an entertaining week past.  Last month’s inaugural Cars & Coffee took place under clear skies and temperatures pushing 60-70 degrees, resulting (or at the least, contributing to) about 500 cars occupying the Westport lot.  This month’s event?  Temp of 41, wind blowing steadily at about 20 kts and lots of people drinking lots of coffee (or taking regular breaks in the nearby McDonalds).  Still, not too bad a turnout, maybe 200 cars or thereabouts.  One TR made the event, ex-Prez Jesse’s orange TR7, along with at least five MGs and a couple of Lotuses. 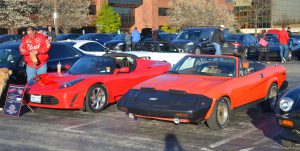 Sunday, a bit warmer, partly cloudy and the Gateway Autocross Association held its first two events of the six-autocross season, at Gateway Motorsports Park.  Good turnout of cars with a fair amount of variety, with a great bunch of people out for a good, high-speed time.  Dan Kuhn, owner of the region’s most unique Ford Maverick and a regular with the BSCC and SCCA autocrosses, had one question: Where are the British cars?

Hmmm, good question.  While I concentrate annually on running the BSCC series (the season opens Sunday 9 April at Family Arena), the next Gateway event is 20 August. Methinks the HSD will make an appearance…

Oh BTW, among the Corvettes, Dan’s Mustang (and a really wild ’65 Mustang notchback with somewhat modified straight six)(!), Miatas, Acuras, etc, the most unique competitor was probably the one below.  To be sure, plenty of people autocross Focuses (Focii?), usuall SRT or RS variants and SLTOA’s own “Daring Dave” regularly autocrosses his Fiesta (and does quite well, thank you).  But a Focus wagon?  That’s different, even for our rather eclectic local autocrosses. 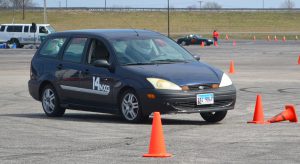