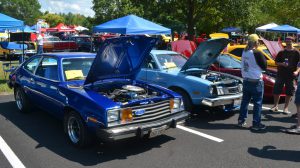 One more from the Scott Centennial show: when was the last time you saw a Pinto, let alone two? 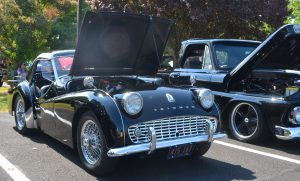 Well, best laid plans and all that.  We welcomed the rain, donder und blitzen last PM as the lawn sorely needed water above and beyond periodic watering.  This morning, however…

Up at oh-dark-thirty, checked the weather radar. Hmmm…scattered thunderstorms, all over the place BUT, I figured I could wend my way through them on the drive to Scott with the TR8. Stepped outside and sure ’nuff, downpour.  The TR8’s top leaks (hey, it’s British…and yes, I do have a TR towel), the wipers have two speeds (slow and glacial) and what with the torque generated by the 3.5L, handling in the wet is a tad squirrely.  Also, with the early hour and seeing as I’d managed my standard mid-week five hours of sleep, I decided to take the all-weather vehicle, the Kia.  Two more major downpours on the way to the base plus the usual semis and people doing ~70 in lousy conditions pretty much reinforced my decision.

Naturally, by late morning the sun was out; by the time I got to the lot by the club at 3:15, the event was going full blast, with a fairly eclectic mix of vehicles.  To be sure, the majority consisted of contemporary Mustangs/Challengers/Camaros but there were others that stood out, like the lineup of older pickup trucks and a really nice 1940 Packard Club Sedan (at least, I think that’s what it was).

And, four cars held the day for the Brit community: a Lotus Elise, two original Minis (one was the car I saw yesterday) and – ta-da! – a TR3, seen here.  I didn’t recognize the car; according to the info card, the owner lived in Flora, IL.  Didn’t get a chance to talk with him, but left a card on the driver’s seat with the SLTOA web address. Hopefully we’ll hear from him.

Cars and Coffee in the morning! 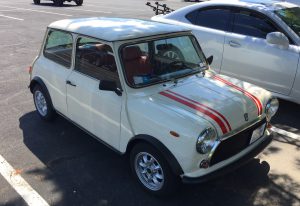 Driving off Scott AFB today, had to do a 180 and get this photo. Not something you normally see over there?

Possibly, the Mini’s on base for Friday’s big Scott Centennial Auto Show, 1400-1800. I’ve entered the TR8 (my arrival on base at my normal time of 0530 should rouse a few light sleepers); according to the event organizer, they’re expecting 150 cars.  Should be fun, stand by for a report with photos. 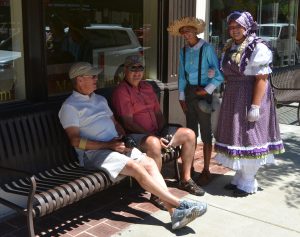 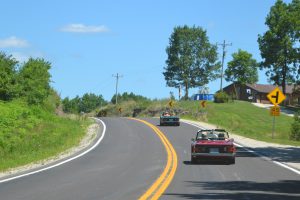 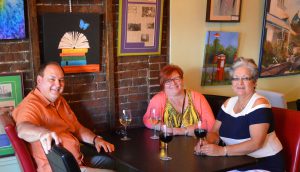 Only a week following the group drive to Blackhawk Farms, some other hardy SLTOA members did an RON (remain overnight) drive to Hannibal for some good food, history, scenery and a visit with Tom Sawyer and Becky Thatcher.

Only three cars/five members made the drive but word is they had a ball (your scribe should know: I was in the third Triumph, the HSD).  Perfect weather and road conditions, good lunch at Finn’s downtown and from the photos taken by those who remained overnight, plenty of interesting sites visited and more great food consumed.

Pity we didn’t turn out more members/cars but hey, anything over two vehicles with this bunch constitutes a quorum.   We just might have to do this trip (or similar) again next year.