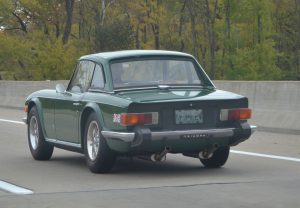 Sunday afternoon, heading back to home plate on MO 364 following the SCCA rally and this green late TR6 popped up in front of me, moving at a high rate of speed.   Think I know whose car it was although I’m not completely sure; I wasn’t aware of any green TR6s with hardtops in SLTOA. 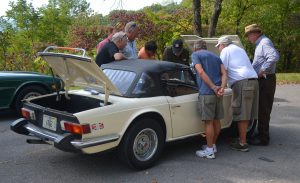 The answer to the question: how many Triumph owners does it take to fix a TR6?

Seriously, last weekend’s 3rd Annual SLTOA Fall Colour Drive, organized by Ed (the owner of the briefly stricken TR) was a major hoot.  We had eight Triumphs, one Morgan, one BMW Z4 and one MX5 and 18 members take part.  The end-of-the-trail gathering at Aerie’s Winery, high on the bluff overlooking Grafton, was equally fun (and yes, Ed’s TR made it up the hill; the repairs held).

Next up, the last “official” drive of the year: 5 November’s 5th Annual Veteran’s Day Run. In the meantime, this scribe is heading out on a work trip, to Barksdale AFB, Louisiana.  I do believe the British Motoring Club of New Orleans has a chapter or det in Shreveport, as always I’ll keep an eye out for TRs in particular and LBCs in general. 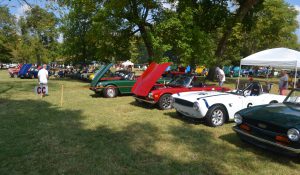 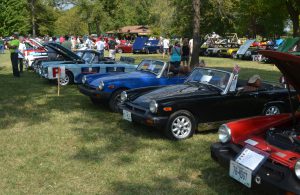 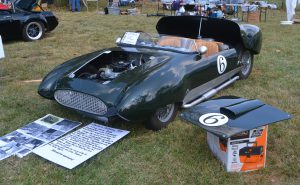 Yeah, several weeks late and real no-kidding fall is apparently upon us BUT, this year’s All British Car & Cycle Show, held under full-blown summer conditions (hot, humid, no wind) was another winner.

According to event organizers the MG Club of St Louis, this year’s field included 154 cars. A good number of the featured marque/models, Austin-Healey Sprites and MG Midgets, showed up and assumed the “line of honor;” the standout, parked a few yards away, was the Sprite-based Sprite-Firestar, based on the Lotus 11 design (something like only three built).

Otherwise, excellent representation by the local LBC clubs, with plenty of Jaguars, MGs, Triumphs, a couple of “Big Healeys” and a brace of Minis (original and new) and Land Rovers. Specifically concerning SLTOA, TR6s dominated, followed by Spits and three Wedges (1xTR7 and 2xTR8).  A mystery Triumph Herald showed up and parked near the concession area. Yes, a club flyer was placed on the driver’s seat, we’re hoping to hear back from the owner with the possibility of gaining him/her as a member.  If there’s two types of cars SLTOA lacks, its Stags and sedans/saloons.

Despite the heat, a great day.  And now, to settle in for some fall driving events.