Rather entertaining rod; couldn’t ID it from the grill, but there’s a Ford plate on the firewall.  What was really startling, though, was the decal in the back window. 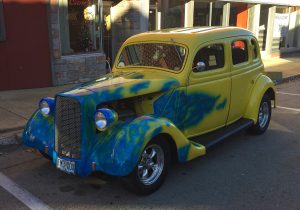 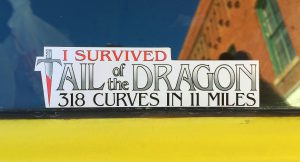 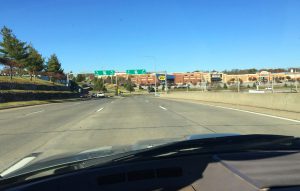 Growing up, I based my knowledge of “typical” Midwest winters on three years in Lincoln, Nebraska, and four years in Grand Forks, North Dakota.  After moving back to the Midwest in 2005, I was startled to find that most of the winters hereabouts were actually pretty mild….cold, to be sure, but major snowfall winters only occurred every three or so years.

Having said that, I can’t complain about living in a part of the country where, on Thanksgiving Day, I can put the top down on the HSD and go out for a drive…or two…or more.

Happy Thanksgiving to all who see this!  I’ll get photos from last Sunday’s most excellent SLTOA/StLSCC Veteran’s Day Run posted later this weekend. 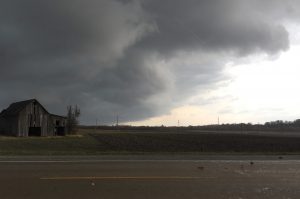 Went out Saturday (18 Nov) to do the final reconnaissance run over the route for Sunday’s Vet’s Drive, saw plenty of this type of weather.

The Vet’s run was a major success, despite the chill.  Details to follow. 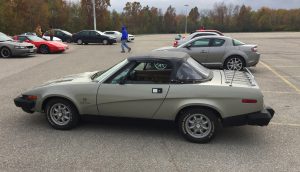 In contrast to the last three ends-of-season for the BSCC autocross series, this year the TR8 finished without a) requiring major mechanical work, b) a large puddle underneath and c) an unexpected ride back to the house on a flatbed.  Life is good!

Windy and brisk at the 8th parking lot grand prix of the year on 12 November, some traction issues due to the weather (cones flying everywhere!) and most of the convertible owners left the tops up on the cars.  Great turnout by the Slow Roller Racing team, we’re already watching for the 2018 scheduled from Racer Steve.

Spied in the parking lot of an Aldi in Independence, MO, earlier this evening.  You have to admire the fine job done on the flux capacitor housing on the front bumper.

BTW, this is the first time I’ve done an upload to the SLTOA blog while moving; am currently on Amtrak’s “Missouri Mule,” eastbound from Independence to Kirkwood.  Any luck and I’ll get six hours of sleep in advance of Sunday morning choir and the last Boeing Sports Car Club autocross of the season. 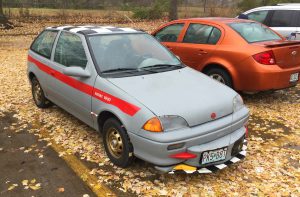