Presenting Kunkle Motors of Dallas, Pennsylvania, located off PA 309 north of Wilkes-Barre on the road to the highly scenic Harveys Lake. While a Saab specialist (I suspect it formerly served as a dealership; in any event, there are a LOT of Saabs around, including 92s/93s and a really nice Sonnett), according to owner Tim Haddle the company now services all makes and models.

I have four more days here in the DC-Baltimore-Annapolis area, we’ll see what I can turn up. 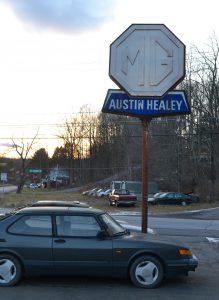 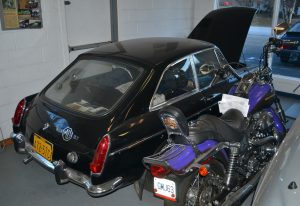 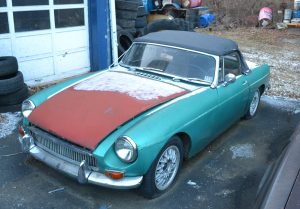 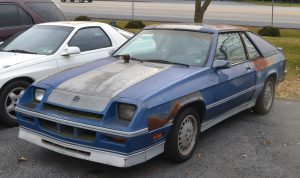 Yup, on the road again, in search of LBCs.  While based out of Bowie, MD, I have managed to range fairly far afield; however, as of Tuesday, when I motored up to Pennsylvania, hadn’t seen an LBC.  Plenty of Jags, Range/Land Rovers and Minis, but no classic Brit sports cars.

I did stumble across this semi-relic on at a dealership on US 22 in Grantsville, PA: a mid-80s Dodge Shelby Charger w/2.2L turbocharged four and a five speed (apparently Shelby substantially upgraded the last 1000 examples, booting the horsepower to 175.  Torque steer anyone?).

Yeah, it needs a little work.  In the meantime, the search continues. 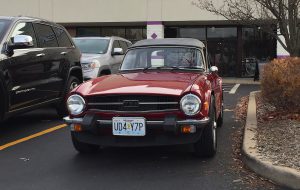 One more time out in the HSD before it goes into the garage (the good news: after six months and the completion of three major home improvement projects, I was finally able to get the car back in the garage for the winter).

While making a stop at the ZX mini-mart on Manchester, observed this this TR6 pull into the adjacent shopping center.  Glad to see others exercising their Triumphs while the weather still cooperated! 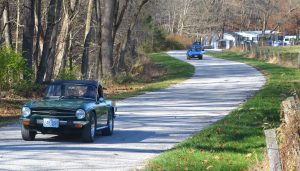 Fifth time for this event, held this year on 19 November (hey, I’ve been busy…) and the participants had a fine – if somewhat chilly, almost universally top-up – drive.

We had 18 cars show, about 30 people and truth be known, the majority of the vehicles were MGs, particularly MGBs…and it was great having them and their owners, a truly great bunch.  In fact, the three brave, top down drivers were in an MG TC, MGA and MGB.  Oh, to be sure, the “home club” was represented, with a TR4, TR6 and TR8 and we had a few other interesting cars, including a Fiat 2000 Spider (that’s a first for this bunch!) and immaculate ’66 Malibu.  Dave Massey did the now traditional playing of the service anthems on his bagpipes prior to departure.  Several of the participants came to attention upon hearing their song; our thanks to Dave for taking part.

In the end, we had a very good drive, with the truly hardy participants enjoying lunch at Stoney’s in Perryville.  Our thanks to all who made the drive and contributed to the Purple Heart Foundation; we wound up with $500 for that veterans’/vet family support organization.