Boy, and to think I used to buy cars without air conditioning.  We are in the middle of particularly nasty stretch of high temps and corresponding mid-to-high humidity, which makes driving our cars top down, uh, challenging. In fact, earlier this afternoon, I saw a black Ferrari Portofino (front-engine, no V12, twin-turbo V8) up on Manchester: top down, windows up, driver had a headband and I have no doubt his air conditioning was going full blast.  The TR8 does have A/C, but the compressor’s T/U and any repair to the system is well down on the list of things to do.  Thus, like the sports cars I owned 30-40 years ago, I rely on the breeze blowing through the cockpit to stay reasonably comfortable.  It usually works but that drive yesterday, back from the Hazelwood Baptist Show up at I-270 and McDonnell…whuf!

The day started with the monthly gathering of the faithful for Cars & Coffee/Westport and, as per usual, something over 300 cars showed up. We had a good representation of LBCs; SLTOA put three TR6s and members alongside the HSD, plus Mike showed up with his immaculate Morgan DHC. Kudos also to the MG Club, which had several cars out; Gateway Healey Association was represented by a beautiful red 3000. 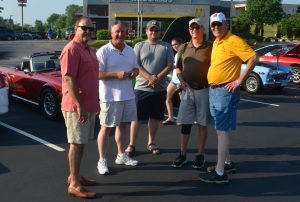 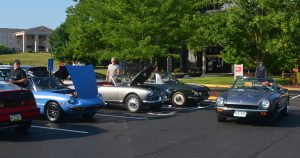 Standouts? As per usual, several highly entertaining cars in the pack, including a lineup of 32 Ford coupes and roadsters (cue The Beach Boys) and an Italian corner with several Alfas, the Lancia Fulvia that regularly shows at Westport and a couple of Fiat 2000 Spiders (hmmm…all of sudden I’m seeing a bunch of 124s/2000s).

From there, on up to Hazelwood, where the TR8 served as one of two Brit cars…shoot, we were the only two foreign cars of any make. Yeah, the show’s keyed towards muscle cars, pony cars, rods and other American heavy metal but it’s a great gathering. The church provides a good venue (I parked near a couple of guys with Show Me Corvair Club along the tree line and thus enjoyed shade for several hours) and really works hard to support the participants and make them feel at home. Great fun, and well worth an annual visit. 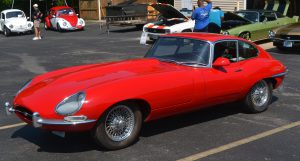