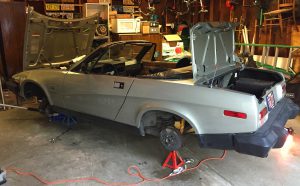 Quite a day…up at 0400 in order to get to work and spend several hours manning the Hurricane Florence response watch, then back home for several hours of work on the HSD.

The car’s cracked, discolored brake master cylinder gave up the ghost last weekend, when a number of new cracks appeared which allowed brake fluid to escape into the engine bay (if that’d happened while I was driving the car, things probably gotten pretty festive). Thanks to Creig, who came over yesterday to take charge of the replace & repair effort (new master cylinder, new braided steel brake lines) and input from fellow Wedge owners Dave, Bob and Jesse, we managed to get the job done.  Creig and I had a helluva time getting the brake fluid to the back end during the bleeding process, but finally it came around.  Now, once again, it goes and stops.

Now to get the car cleaned up and ready for Tuesday night’s SLTOA meeting and next Saturday’s All British Car & Cycle Show at Creve Coeur Lake Park.

From the sublime (a 1949 or thereabouts Mercury sedan)…. 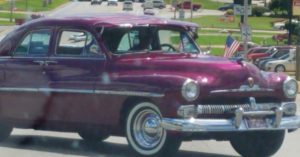 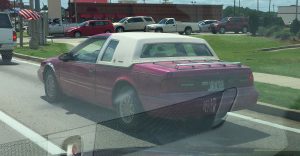 As to the quality of the photos, obviously, both were short-notice pop-up cell phone shots through the windshield.  BTW, I did see one LBC on the weekend’s excursion down to Piggott, AR, and back, and MGB.  Unfortunately, it was heading southbound on US 67 while we were driving northbound at a high rate of speed.