The High-Speed Doorstop, having sustained the fuel pump failure (actually, it was an electrical glitch; the pump’s fine), getting loaded at Family Arena for the return to Baldwin. 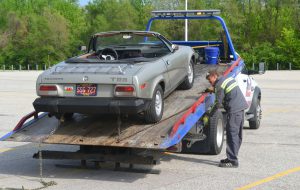 Second, said HSD, now running flawlessly, at the Pacific Car Show, Saturday, 29 June. I provided one of two LBCs among, oh, 150 cars, the other being a ’53 MG TD. Great show and great hospitality by the residents and businesses of Pacific. 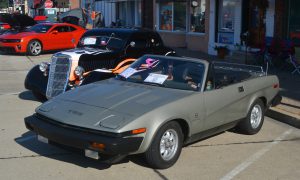 My apologies for the very long absence from the blog, but between a two week trip to the UK and some pop-up technical difficulties, time just kind of got away.  On the plus side, during the run to England and Scotland, I did manage to see one TR6, three Spits (two running, one a work in progress up by Cambridge), one older XJ6 or XJ12 and two Minis, featured here.  In fact, the only cars I managed to get photos of were the two Minis; everything else listed pretty much blew past before I could get a hold of my camera. 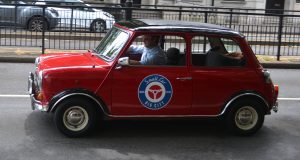 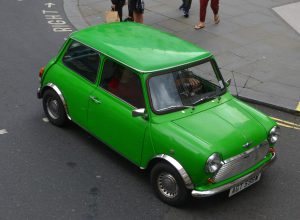 Otherwise, a few quick observations (and details should appear in an article in the July Exhaust Notes): there are now 26 million people in London and the immediate vicinity and despite restrictions and taxes/fees, a lot of them drive.  Fortunately, the Underground and long-distance rail systems work great and are highly entertaining.

Two, the motorways are great, pretty much like our interstates over here in the Colonies and adjusting to driving on the left wasn’t that big a chore (I previously drove in Britain in 1984). Roundabouts/traffic circles?  The learning curve on those was a tad more involved. Secondary roads, the “A” and “B” routes?  Jeez…no shoulders, most of them had curbs…and when you’re tooling along in a large Alfa Romeo SUV and some big lorrie comes blasting around the corner going in the opposite direction, it tends to get sporting real quick.

Still, overall, a great time (even managed a day at RAF Lakenheath with a couple of my counterparts), might even be able to get back for another visit – with an emphasis on my Welsh ancestral homeland (cue “Men of Harlech”) – within another year or so.

And now, back to the local activities…which includes driving/autocrossing the TR8.  Yes, we got the fuel pump electrical glitch corrected…