And another great show/gathering it was.  While we had a bit of light drizzle late in the morning, the weather otherwise cooperated (okay, okay, it was overcast until late afternoon, but that kept the temperature down) and a large crowd thoroughly enjoyed the collection of about 200 British cars.

Not surprising considering its status as the featured Marque, but Jensens dominated the field. As part of the annual confab of the Jensen East group, we saw 20+ Jensen-Healeys, 5-6 Interceptors, three immaculate 541s and a ’35 Jensen Shooting Break “woodie,” which I believe won the Best of Show trophy (well deserved!).  Elsewhere on the field at Creve Coeur Lake Park, the usual large number of Triumphs, MGs and Jaguars, as well as several Austin-Healeys (primarily Bugeyes/Frogeyes), Lotii, new Minis and some oddities, including two pre-WWII Rileys (!).  For whatever reason, the original Minis didn’t turn out this year, but we did have two Mini Mokes on the show field.

The event organizer, the MG Club of St Louis, did itself proud once again this year, putting on a smashing event.  Our thanks to their membership for their hard work as they certainly delivered. 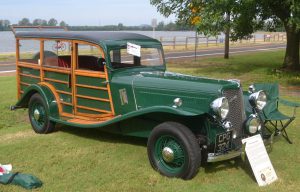 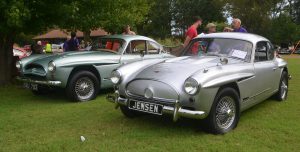 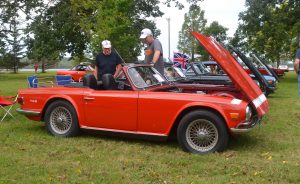 Just a week to go before the 38th annual iteration of the BIG All British Car & Cycle Show, hosted by the MG Club of St Louis.  SLTOA’s taking a break from handling the food concession (which’ll give our members more opportunities to relax and enjoy the show), so don’t be surprised if a couple of Roach Coaches show up (at least, that’s what we called food trucks when I was in the Navy.

Also, this year’s ABCCS also coincides with the big Jensen East national gathering.  As a result, the MG club selected Jensen as this year’s featured marque.   While Jensen-Healey owners have made a strong showing the past several years, this one’ll probably be a record breaker: possibly 40-45 Jensen-Healeys and Jensen GTs, 10 or so Interceptors and hopefully 10 other, older examples of the marque.

As before, the event takes place at the Creve Coeur Lake Park on Marine Drive, off MO 144.  For info, call up https//allbritishcarshow.com.  Even if you don’t have a Brit car, grab the family and come on down, you will enjoy yourselves. 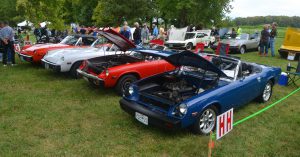 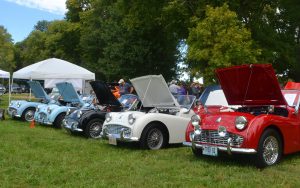 …and, to top the Texas van, this home built camper is submitted for your consideration.  Would’ve prefered a down-sun shout but with my desire to emphasis the back of the camper body, this was the best I could do.  Next you know it, we’ll stumble across the Magic Bus and possibly a group of Merry Pranksters. 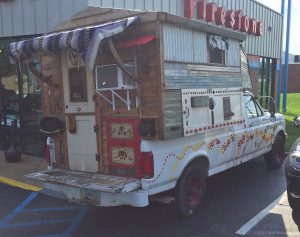 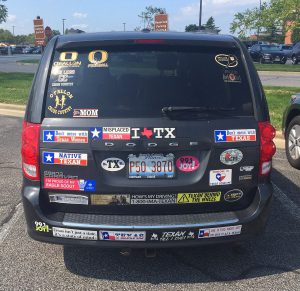