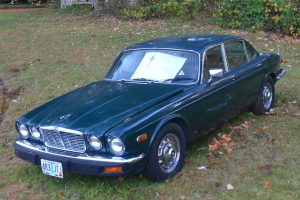 As in “Little Irish Car.”   Observed on OR 99W in Tigard, Oregon, earlier today. 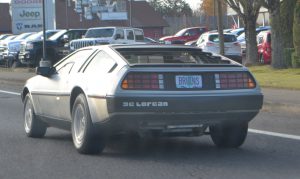 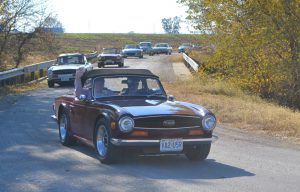 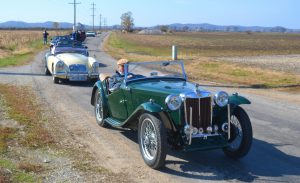 Today we have temps plummeting, snow coming down (hey, Midwest in November, go figure) and tomorrow’s commute will undoubtedly prove challenging. But, yesterday, Sunday 10 November, we had severe clear and a high in the mid-60s, perfect for the annual drive down to Chester to raise funds for a vet’s group.

And what a turnout! Twenty-plus cars, nearly 30 people, plenty of Triumphs but also the usual assortment of other, more-than-welcome vehicles and drivers. The list included several MX-5s, an Infiniti (!), Volvo PV544 and a ’66 Chevy Impala coupe. It made for quite a procession as we worked our way between the bottoms and the bluffs, south from Columbia, IL. There were a couple of missed turns on the drive down but the group recovered and generally, we’ve received rave reviews from those who took part.

As a bonus, after lunch at Reid’s Harvest House in Chester, several participants crossed back into Missouri and made a stop at the full-size replica of the Vietnam War Memorial. Built by a local resident, the memorial is impressive and all agreed – particularly our older veterans – that it was well worth the stop. We’ll make the memorial a regular checkpoint on future Veterans Runs.

I’ll tell you what, when 6-Pack – the national club for TR250 and TR6 owners – throws a party or a confab, they really know what they’re doing!

Titled “TRials,” this year’s annual gathering took place here in St Louis, with the crowd staging out of the Doubletree at Westport Plaza; the event coordinator was a member of SLTOA (he and his wife have two really nice TR6s) and several members of the club volunteered to assist with the various events, including Saturday morning’s car show on Main Street in St Charles and a number of drives on Friday and Saturday.  Some of the excursions went to local special interest car businesses such as Fast Lane while the others explored the local scenery…usually involving one or more ferry rides.   The confab wrapped up with an awards banquet Saturday night.

From what we’ve heard, something like 80 cars showed up, figure on around 120 or so participated from all points of the compass.  They represented multiple states and the Province of Ontario; two participants came all the way from Southern California (Arroyo Grande and Venture, to be specific).

All who attended had a great time. Our congrats to the club and Kevin and Dee for successfully putting together and honchoing this massive gathering. 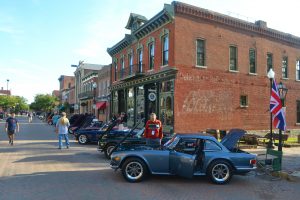 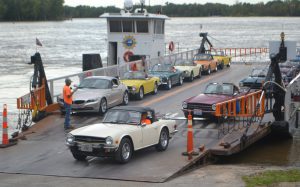