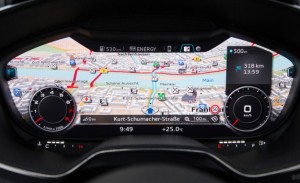 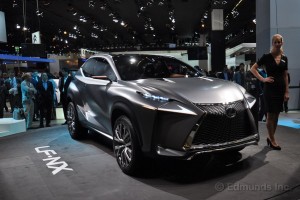 Darn good meeting of the St Louis Triumph faithful last PM, including the election of a new slate of officers to take the club through the next two years. Otherwise, event planning continues – Including the run-up to the Horseless Carriage Club of Missouri’s annual Easter Concours at Forest Park in about five weeks – and it does look like we’re going to have quite a year.

Now, excuse me while I engage rant mode.

Note the photo on the right. Â The vehicle is a Lexus proposal for its next-generation luxury SUV, designated the LF-NX. I’ve said it before, I’ll say it again: I swear Lexus (and by extension, Toyota) have hired Predator as their styling head (the photo’s via Edmunds.com)

Photo left, courtesy of Car & Driver: this is the all-digital dashboard of the upcoming, updated Audi TT. Yes, that’s a moving map display between the two digital gages (doggoneit, I thought we’d killed off digital instruments back in the ’80s). Can you say major distraction while driving boys and girls? I know you can.

Rant mode to standby, we now return to regular programming.